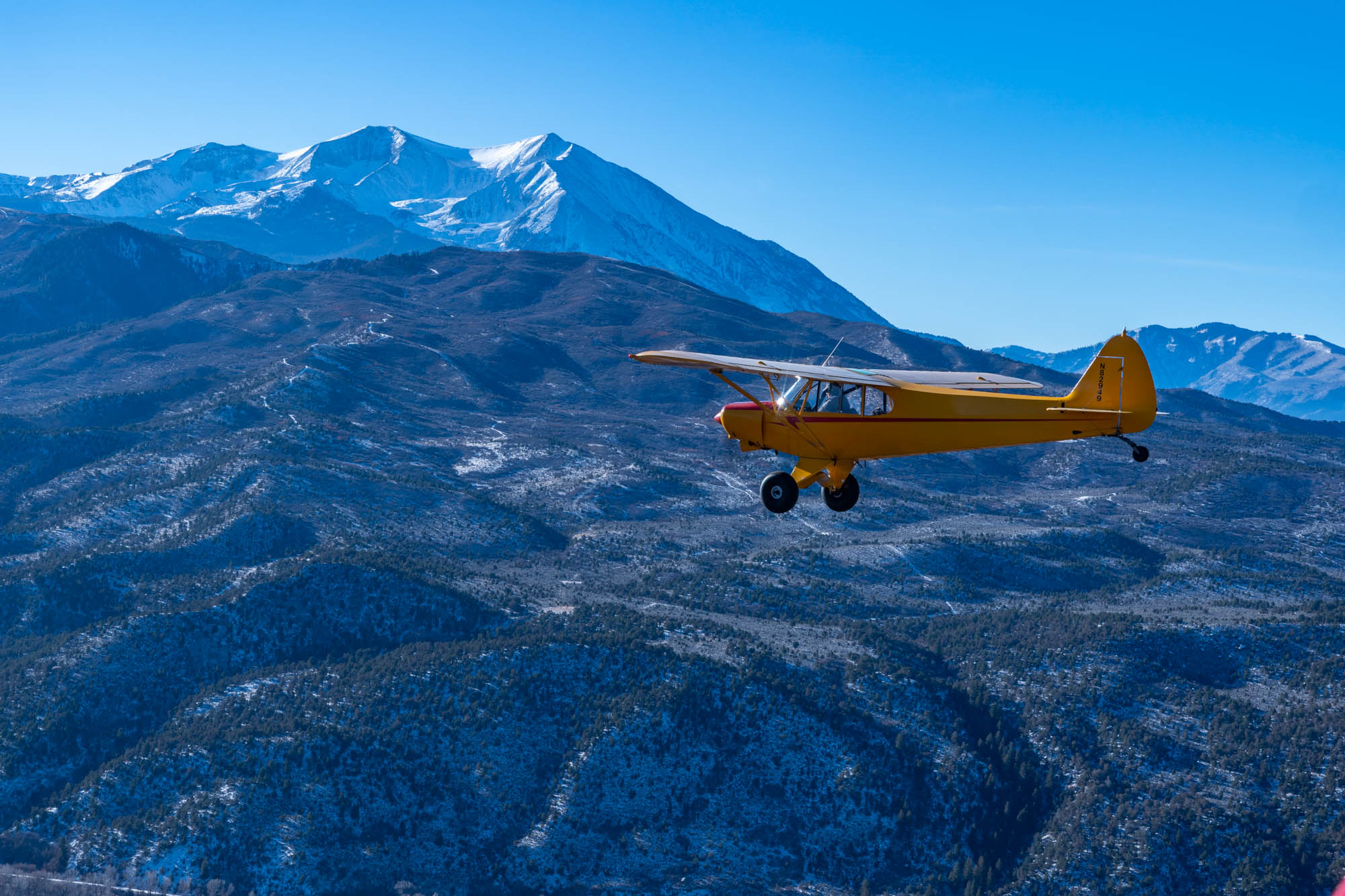 BY Pete McBride Photographer, Videographer, Author, and Bank of the West Brand Ambassador

Cover Image:
Flying near the Elk Mountains of western Colorado.

Wingmen: A Father and Son Document the West’s Disappearing Water from Above

When the air speed indicator dips below 90 mph, I holler, “Opening!”

My father nods. An icy blast crashes through the cockpit, and I twist in my seat, steady my camera, and try to frame the headwaters of our local river.

As I lean my torso out the window into the blast of wind off the propeller of this single-engine Cessna 180, the aircraft suddenly heaves violently, then careens sideways like a paper plane in a duster. My stomach lurches against my ribs, and I float weightlessly in my seatbelt. We start to plummet sideways. I clutch the open window frame and look at my father—my hired bush pilot. He is riveted at the controls. As we drop faster, time slows. 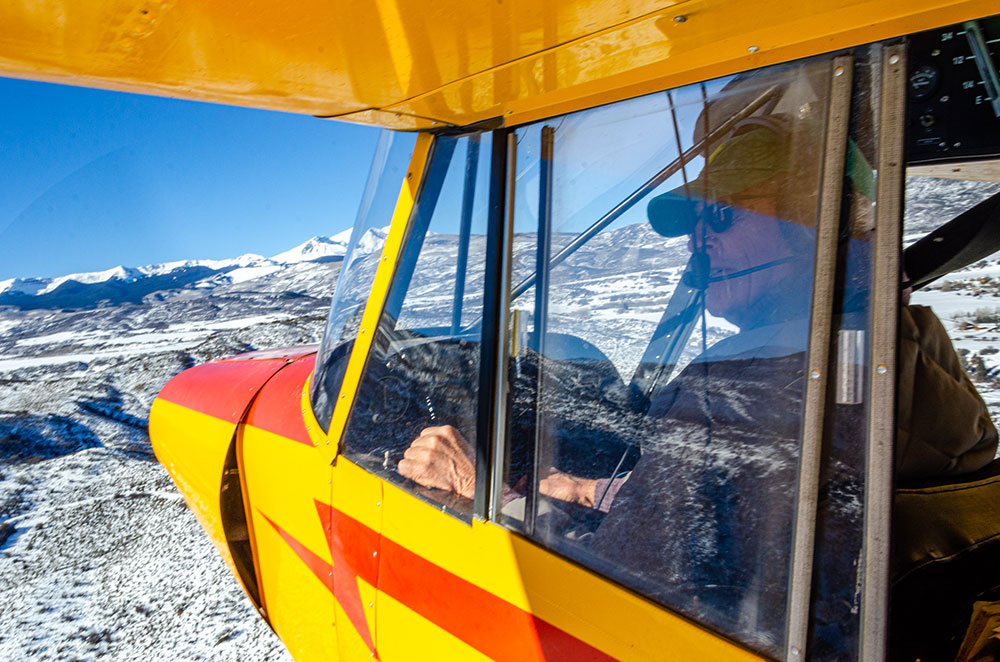 Pete McBride’s father looks out the window of his plane as he flies over the Elk Mountains of Colorado.

“Wind shear…we need to get lower.” He crackles in the headset as if talking to himself. Suddenly, the fuselage starts to vibrate and quiver. It feels like a soda can about to crumple. Some thirty seconds later, my father corrects our crooked flight. My organs settle, and our weight returns to our seats. I take a deep breath and continue to document the river’s headwaters below us.

“Let’s not do that again,” says my father. “This is our last pass, get the shots.”

I nod, my face growing green.

We are flying a giant figure-eight pattern above Rocky Mountain National Park at roughly 13,000 feet, just west of Longs Peak. Below us, a slight mist hovers above a sliver of water that looks like a piece of loose yarn dropped on a green floor. 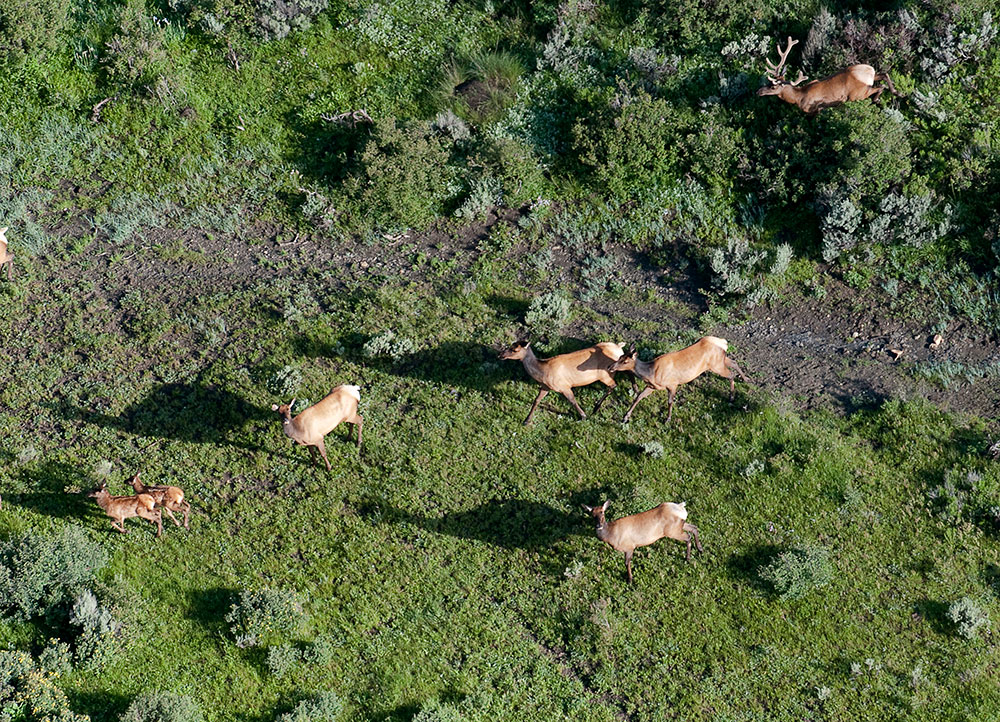 A bull elk and his harem lope across a high meadow above the river basin in the Elk Range of the Rocky Mountains.

The two of us are a bit rattled from the turbulence but don’t say a word. This is not our first aerial rodeo. We are on a mission to document the ribbon of water below that meanders 1,450 miles southwest as the “lifeline of the American West”: the Colorado River. After years on the road in remote reaches of the planet working as a photojournalist and filmmaker, I’ve returned to my home state of Colorado to photograph a place closer to my heart, but also to connect with my father and family after so much time away. 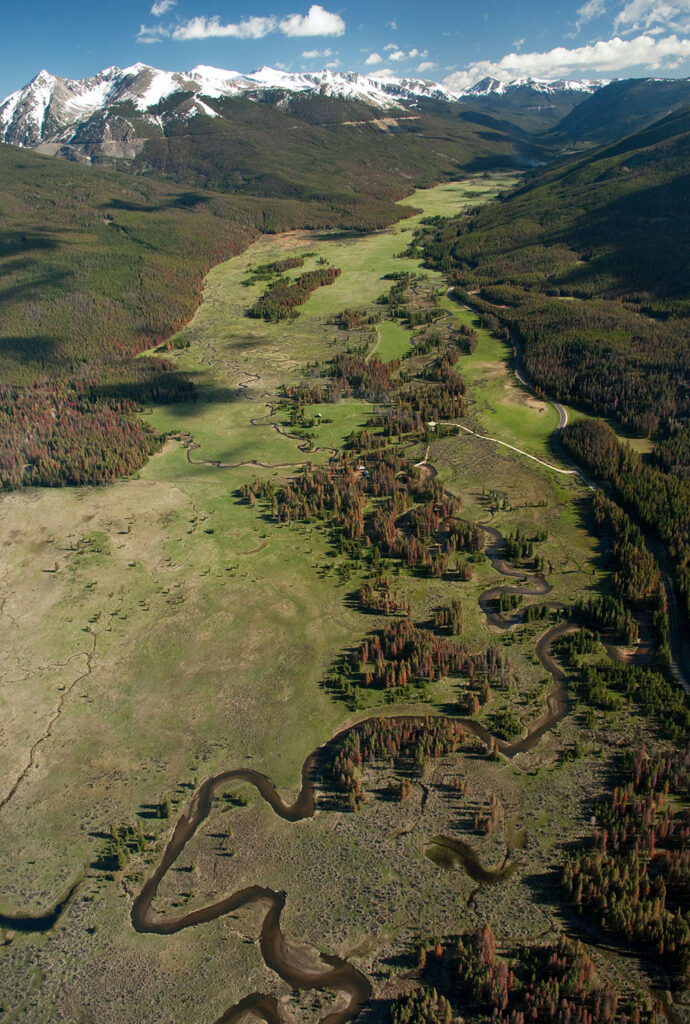 My father John is now 83-years-young and still flies a two-seater 1974 Piper Cub (top speed 110 on a good day). The claws of age are leaving their mark and slowing his step, but his humor and dedication to protecting the world he knows, his community, and his family are as spirited as ever. Over his career of low and slow flying, he has seen a lot—especially change—but his “stick and rudder” piloting forged from 60 plus years of flying single-engine planes remains safe and solid.

We fly together when the weather is calm. There is something special about our time in the sky. Obviously, there is the rush of flight and aerial vistas, but more importantly, it is our ritual to connect in a very focused way—about flying, the West, water, life. My father introduced me to the outdoors through hiking, camping, skiing, and often loosely-planned adventures, but as age has taken its toll on my dad’s hips and knees, flying remains our way to explore. 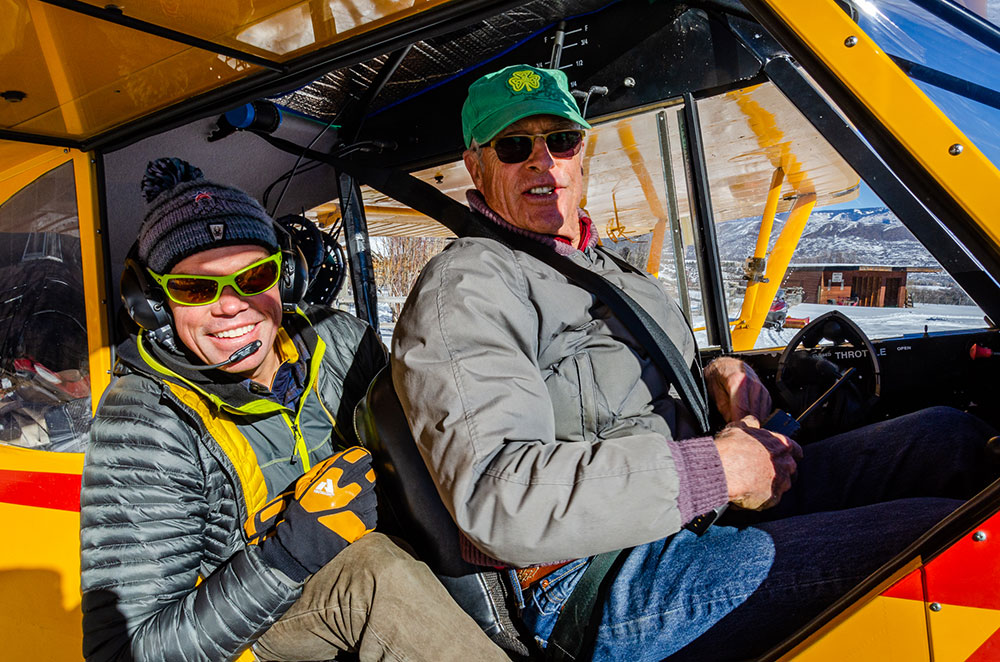 Pete McBride and his father, John McBride, in John’s plane on the ground in western Colorado.

Ironically, these father/son flights ground me in ways that often surprise me. The aerial vantage, a few hundred to a thousand feet off the ground, provides scale and perspective of nature. It shows us where we as humans have been and where we haven’t, and as a result, it very clearly highlights the impacts of people.

I am of course acutely aware of the contradiction in using a small fossil-fuel-burning aircraft to document the environment, but my father’s plane is actually quite efficient, more than an SUV, so it seems like a worthy tool, for now. Nonetheless, I look forward to a day when electric aviation or something else is a viable alternative.

“While flight perceivably provides great freedom, it also acutely teaches us lessons about ego, humility, and not overreaching limits.”

While flight perceivably provides great freedom, it also acutely teaches us lessons about ego, humility, and not overreaching limits. For instance, if you fly too slowly, the plane loses airspeed and stalls. Fly too fast and risk damaging the wings or airframe. Turn too sharply or climb too steeply—stall as well and plummet. Ignore maintenance or fly too long, there is no option to park on the side of the road and ask for service or options to refill. For pilots, these limits are obvious but deadly traps nonetheless. Add the complexities of weather, terrain, wind and wind shear and everything compounds rapidly.

In my short time enjoying the privilege of this aerial perch with my trusty pilot father and friend, we’ve witnessed remarkable beauty, which always awes and humbles us. We’ve crested snow-capped peaks and then glided down to where the mountains erode into deserts and observed how water has sculpted every corner of our world.

We’ve also seen some striking changes in the landscape. Some good. Some not. Since we started our father-son wingmen ritual, the Colorado River has run dry. Many of its tributaries have followed. Snowpacks have shrunk, some ranches have gone fallow, and many more are now developed with homes.

But we have also seen lands protected, some ranches saved, a few parks enlarged, and monuments either created or reaffirmed and applauded by native communities. 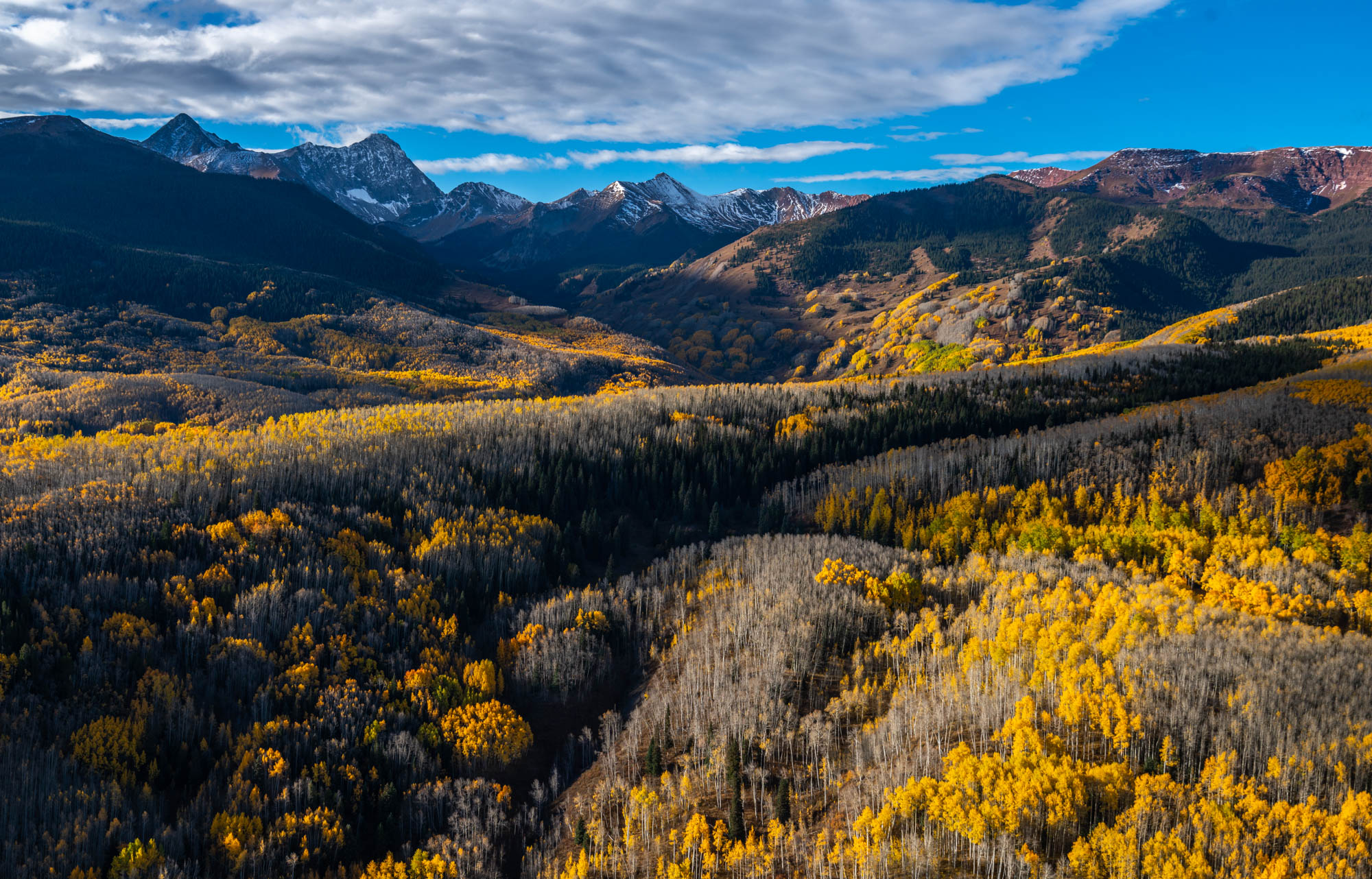 Aspen trees display their classic gold in large swaths across the Elk Mountains when October rolls around, while the first snowfall has already descended on the high mountains.

For my father, human development has been a steady current throughout his years. Like many, he played a hand in such changes, building affordable commercial spaces and resident-occupied housing for a ski town. But he has also kept a close eye on the throttle of growth, just like he does with the RPMs in his plane—never pushing the engine too hard or flying too fast. 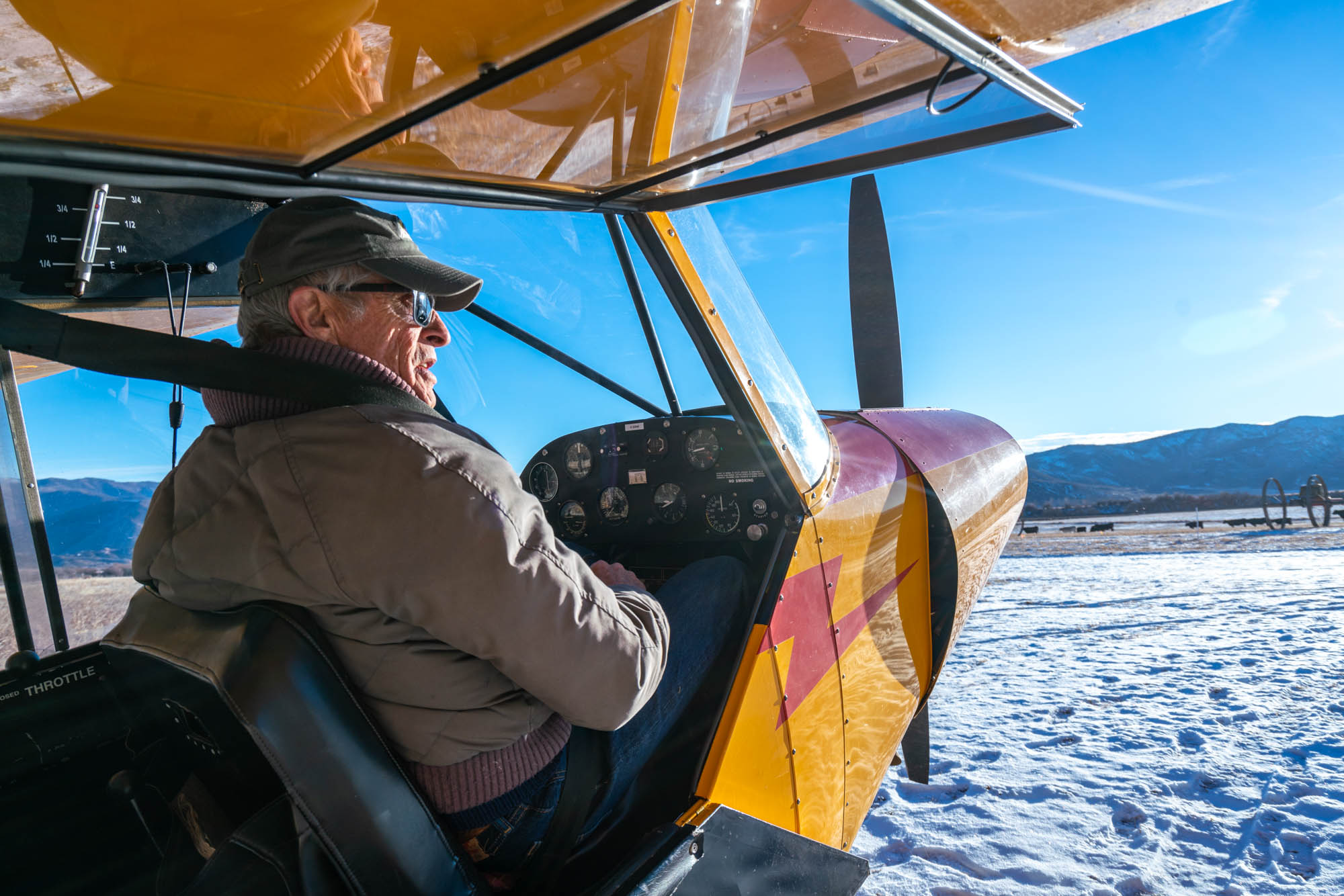 Pete’s father John, preparing for flight. His motto: “If you have time to spare, go by air.”

Unfortunately, we have hit and pushed well past many limits in the western US The race for more, typically natural resources, often makes it feel like no one has time to spare. Of course, the warnings to slow down are all around us—drying reservoirs, raging wildfires, atmospheric rivers. But we westerners are good at adapting and engineering our way through adversity. We have kept flying, so to speak, despite the warnings.

Not long after my father got his pilot’s license in the late 1950s, Glen Canyon Dam, which creates America’s largest reservoir Lake Powell, went under construction. My father explored the soon-to-be-flooded river chasms upstream on foot, which many dubbed “the canyon nobody knew.” Of course, there were many native peoples who knew those canyons well for centuries and resided throughout its nooks and crannies. My father saw untouched archaeological ruins and was amazed to think they would be flooded by the late 60s. 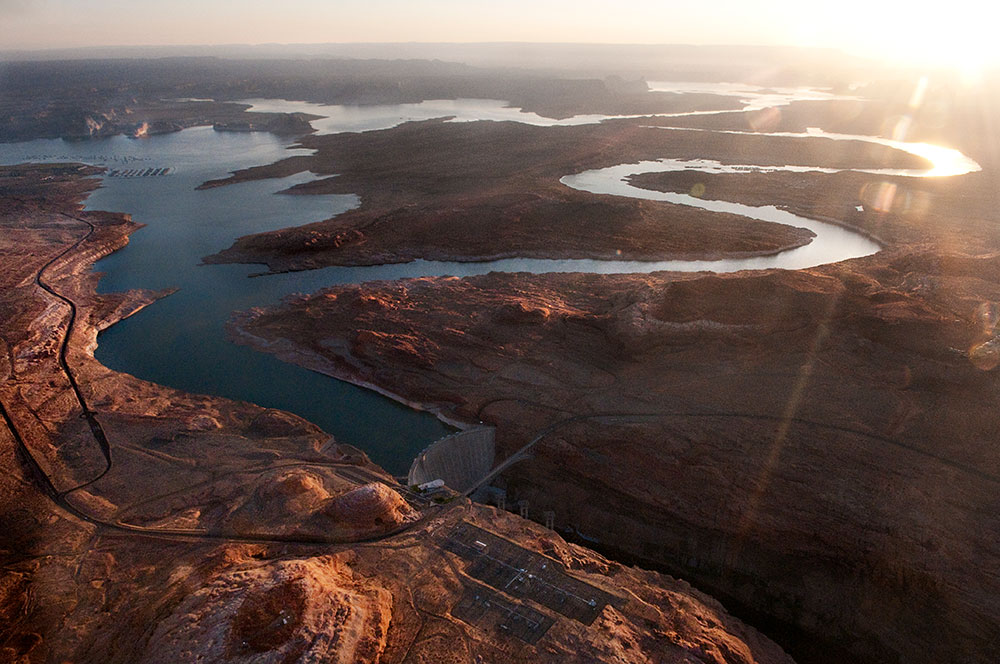 Glen Canyon Dam and Lake Powell. The Colorado River ran through the pictured right-hand channel until the dam stopped the flow and flooded both Glen Canyon and the lowlands out to Wahweap Marina (top left).

In the 1980s, our family visited Lake Powell for a camping trip to explore not by foot, but now by boat. We camped on the shore and later froze during a powerful desert storm that left us all shivering. But we rented a rusty motor boat and zoomed up flooded, finger-like sandstone fjords and wondered what lay below. We all questioned if Dad had hiked somewhere below us decades prior.

In 1983, Lake Powell hit full pool and nearly flooded due to a giant, unruly snowpack. Camping once more, we got to see the lake brimming, and water ski on its glassy waters reflecting the desert hues.

But since the 1990s, as populations doubled, tripled, quadrupled across the West, Lake Powell started to drop, leaving a visible “bathtub ring” that is glaring when seen from the air. The bleached white bands, growing by the year, remind us of the water we once had. It is like a high mark on our water bank account—quickly running dry.

Today, Lake Powell sits at 28.25% of Full Pool (as of Dec. 2021). And next summer, the Bureau of Reclamation has forecasted water models with levels potentially dropping so low, there will not be enough water to turn the turbines that create electricity for 5.8 million homes across the southwest US.

Prolonged drought is a culprit, as is a hotter and dryer weather pattern created by a changing climate. But we have also over-allocated a watershed and ignored its warnings. Now we face a flight path ahead that looks bumpy with diminished power.

I often fear that the only way we will change course is when we are forced to. In the case of water, it appears that will be when taps stop running.

But I’m also starting to feel more hopeful. I’ve started seeing cooperation around the water world in areas that are typically pitted against each other. Ranchers are now talking to conservation advocates and energy providers with hydrologists to find ways to work together. Conversations, though long overdue, are starting to happen. 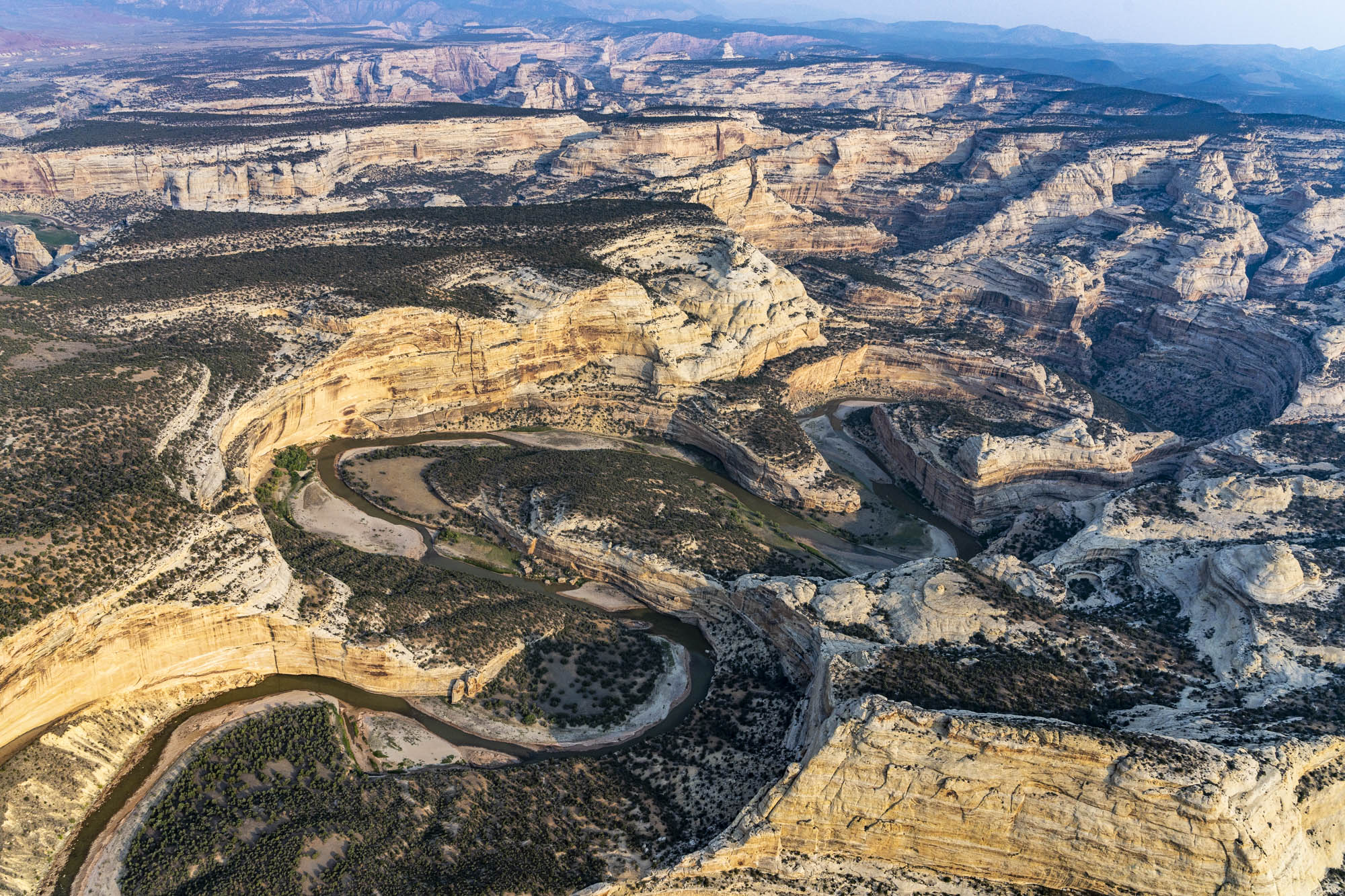 The Yampa River flowing through Dinosaur National Monument during the “megadrought” of 2021. Some call it the “aridificaton” of the West. Extreme wildfire smoke can be seen in the distance.

During the “megadrought” of 2021, I saw the Yampa River, Colorado’s longest free-flowing river, nearly run dry. Thankfully, it didn’t because stakeholders statewide worked together. And one of the endangered fish that swims its waters, the Humpback chub, got de-listed from endangered to threatened because people have worked tirelessly across private and public sectors for decades to protect it.

My father and I have flown over the Yampa River many times, marveling at the geological wonders of Dinosaur National Monument below. We’ve had smooth flights and rough ones. A bumpy one years ago, when I was ten, made me “lose my lunch.”

My dad felt terrible, but kept his cool as any good pilot does. As we bumped along, he reminded me to look ahead, breathe, stay calm. “Trust me,” he said, “it will get smoother ahead and we will get there.”

When I see today’s environmental turmoil, I often think of his words—and lessons. It may be a bumpy ride, but if we work together, acknowledge our limits and that of our shared, blue flying sphere—we can adjust our course and get there, to a smoother place.

Upcycling Is the Next Frontier for Conscious Consumers

Upcycling has reached a tipping point from niche curiosity to an increasingly common way to make consumer goods. Here's where to find it.