The close of 2020 has been, in a word, extreme. The Dow Jones Industrial Average topped the 30,000 mark for the first time in history, a surge that collided with another historic moment, one where a record number of Americans find themselves struggling to put food on the table. As a recent analysis of federal data by The Washington Post illustrates, the plunge into food scarcity is as unprecedented as the rise in the Dow. “Experts,” they write, “say it is likely that there’s more hunger in the United States today than at any point since 1998, when the Census Bureau began collecting comparable data about households’ ability to get enough food.”

83-132 million: The number of people worldwide expected to become undernourished due to COVID-19. They join the 690 million who went hungry in 2019.

In the US, economic fallout from the pandemic has been the largest contributor to rising rates of food insecurity. Before COVID-19, 37 million Americans were food insecure, according to Feeding America, the largest domestic hunger-relief organization in the US. But that total has grown to include 17 million more food-insecure Americans—a 46 percent increase—since COVID-19 began. That’s 16 percent of the US population.

“One in ten parents of babies and toddlers must put their children to bed hungry.”

Behind these statistics, of course, are people: a worker attempting to quiet a growling stomach with a cup of coffee, a student stretching a single serving of ramen to last a full day, a senior forgoing meals altogether. And then there are children. Brookings Institution research fellow Lauren Bauer reported this fall that almost 10 percent of parents with children between zero and five say, “their kids do not have sufficient food, and they lack the resources to purchase more.” One in ten parents of babies and toddlers must put their children to bed hungry.

The tragic irony is that those hardest hit are often the ones who feed us: small farmers, migrant laborers, factory and slaughterhouse workers, supermarket clerks, and restaurant employees. A 2007 study of migrant and seasonal farmworkers showed food insecurity impacted up to 82 percent of families, and a 2014 Economic Policy Institute report estimates 43 percent of restaurant workers do not earn enough to make ends meet. The pandemic has exacerbated challenges with affordable housing, systemic bias, and low pay, making these workers among the most vulnerable to both hunger and COVID-19.

The hopeful news is that a growing number of organizations are recognizing how hunger disproportionately affects distinct communities and are working to address each group’s specific obstacles to food security. These organizations work to foster what exists on the other side of this challenge: a food system that sustains and nourishes all people.

Housing for the Harvest

Feeding the Californians Who Feed Us

Many of the fruits and vegetables grown in the US are picked by hand. These hands are disproportionately brown and black, belonging to those most vulnerable to the impacts of COVID-19. CDC data indicates Black and Latinx individuals are three times more likely to contract the virus and twice as likely to die from complications than their white counterparts. And yet, because many migrant workers lack certain employment protections, when they do get sick, staying home to recover may result in loss of income. 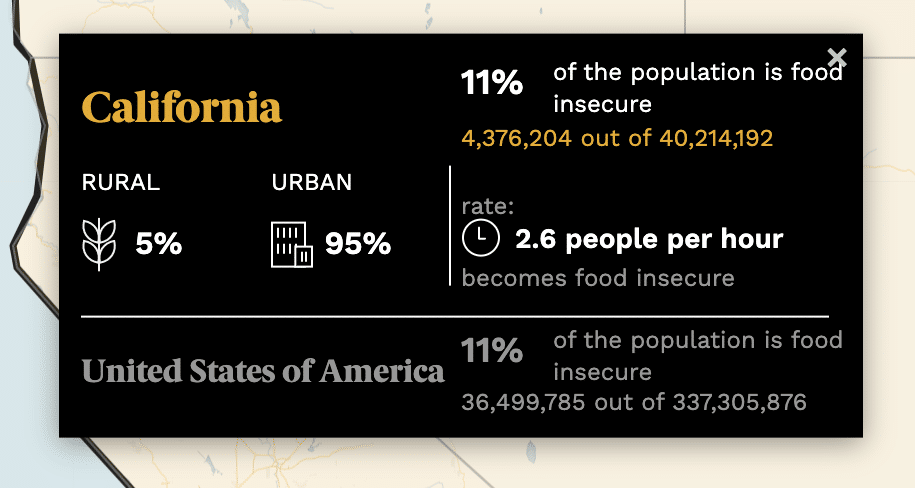 Housing for the Harvest, a joint initiative between California state and local governments, offers temporary housing for people who work in the fields or in food processing who have tested positive for COVID-19 and cannot self-isolate at home. The program provides free meals, wellness checks, and transportation, so workers don’t have to make a choice between health and hunger.

In the spring of 2011, volunteers in a donated yard space in Rogers Park, Chicago, sowed the first seeds of what later became the Yard Sharing Network. Most early participants had never before grown food, yet that summer they reaped an abundant harvest: fresh produce and a vision of creating an expansive communal network of shared land stewardship that has transformed their relationships to food production.

Nearly a decade later, the fruitful sites have consolidated into one large plot. It has not only nourished the community with thousands of pounds of produce, but also, as a space for potlucks, educational activities, and other events, it’s provided opportunities for community-building.

While the pandemic forced many restaurants to shutter—exacerbating food insecurity among its already at-risk employees—hospitals have seen their workloads skyrocket. This collision of challenges inspired Frontline Foods, a nonprofit that buys meals from independent restaurants and delivers them to the nurses, doctors, and staff on the frontlines of the pandemic.

One hundred percent of donations pay for meal purchases, supporting struggling local businesses and helping to keep restaurant workers employed. Frontline Foods launched in San Francisco and is now supporting hospitals and restaurants nationwide. Chapters have served approximately half a million meals, made by more than 1,200 local restaurants, to hospitals from coast to coast.

Serving Up Comfort in the Kansas Heartland

When the pandemic hit, Heriford’s commitment to nourishing her neighbors didn’t stall; it transformed. She started serving carry-out meals and boxes of customized grocery staples—free to anyone in need—and continues to do so. “The safest and most impactful thing I can think to do with this tiny space,” she explains on Facebook, “is to keep serving free daily meals until it is safe to resume service in a more substantive capacity.”

These efforts are sustained by donations, pie sales, and proceeds from her new book, Ladybird Collected, a collection of essays reflecting on Ladybird’s place in the community. 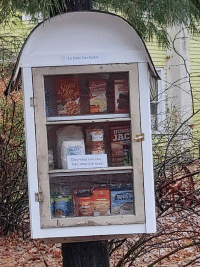 1471: Number of Little Free Pantries in North America. Like Little Free Libraries, LFPs stock food and personal care items for anyone who needs them.

A 2018 study found that up to 30 percent of college students are food insecure. According to the College & University Food Bank Alliance, this negatively affects learning, grades, graduation, and time-to-degree. A new study found food insecurity compromises student mental health as well. And it’s not just students. Forty percent of contingent and adjunct faculty at the nation’s colleges and universities have trouble covering basic household expenses at points throughout the year.

This is why groups like the University of California, Berkeley’s student Food Pantry are so important. The Food Pantry is open to university students, staff, and faculty without eligibility requirements or limitations on how much food can be taken per visit. In 2014, the Pantry provided emergency nonperishable food and fresh produce donated by local farms to around 500 students; by 2019, they averaged nearly 20,000 visits per semester. 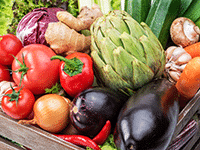 Students from 230 colleges in the Food Recovery Network have recovered 3.85M pounds of surplus food from campus and restaurants for local nonprofits.

In addition to the many innovative community organizations tackling hunger, there are, of course, food banks. (Find a comprehensive list here.) These local institutions’ knowledge of their own communities helps the neediest residents get immediate support. Many community food banks are struggling to keep up with the dramatic increase in food insecurity.

Feeding America—a nationwide network of more than 200 food banks—estimates “the total need for charitable food over the next year will be an unprecedented 17 billion pounds, more than three times the network’s last annual distribution of five billion pounds.”

If you have the resources and capacity, this is an opportune moment to extend support to local food banks and pantries, as well as other organizations working to grow a vision of communal sustenance. The inspiring examples highlighted here are just a few of so many across the US that are helping hungry Americans in communities large and small—from farmer to chef and seed to plate. Every one of them could use a little extra support during this time of increased need across the country. 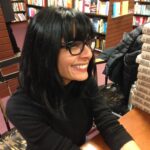 Simran Sethi is a multimedia journalist, academic and public speaker who's endlessly curious about psychology, sustainability, food, and the people and places that nourish us.

The BIPOC Guide to the Outdoors