How far would you go to help the planet? Would you swap your car for public transit? Would you get into upcycling? What about your money—would you change where you bank?

Nearly 90 percent of American consumers believe individuals can positively impact climate change by altering their behavior. And 93 percent think it’s important for banking and finance companies to take action to fight global climate change, according to the inaugural Money Matters Report, released by Bank of the West on March 9.

Gen Z leads on turning those thoughts into action, while many consumers still don’t grasp the connection between their banking decisions and climate change. Still, 77 percent of consumers and 42 percent of business executives don’t know how their bank is using their money, according to “Bank of the West’s Money Matters Report: Revealing the Sustainability Intentions Gap”.

Gen Zers are more likely than older groups to say they’d switch banks if they knew theirs was financing environmentally harmful activities like fracking, Arctic drilling, or coal-fired power plants.

“Many consumers still don’t grasp the connection between their banking decision and climate change.”

Their higher sense of urgency is understandable. Earth’s climate emergency is set to be the defining challenge of Gen Z’s future. And banks play a role in factors that accelerate climate change. Banks send the majority of customer deposits back into the world to finance things that may or may not align with customers’ values. The four largest US banks, for example, are among the biggest funders of the dirtiest fossil fuel activities.

Climate-concerned teens and 20-somethings are in good company. In a recent piece for Fortune, Patagonia CEO Ryan Gellert urged companies to take a closer look at their banking relationships. Plus, 98 percent of business leaders say it’s important for the finance industry to fight climate change. 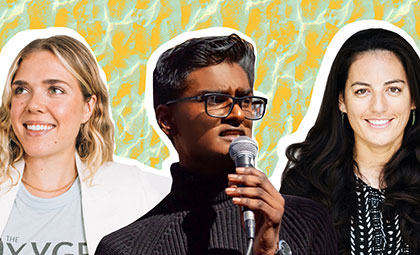 The 2022 Money Matters Report from Bank of the West provides a fresh look into the relationship between people’s beliefs, their actions, their money, and the planet. Conducted by research firm Material, Money Matters reveals how many Americans want more action on climate change—and that opportunities to take that action exist now, both for consumers and businesses.

As illustrated in the video above, most people don’t know what their bank does with their money—just 22 percent know whether their bank finances fossil fuel extraction methods like fracking. But lack of knowledge doesn’t mean lack of care.

Here again, Gen Z leads. Here’s how the generations compare on whether they’d switch banks if they knew theirs had no restrictions on financing the following activities:

Consumers That Would Switch Banks Over Environmentally Harmful Financing Practices 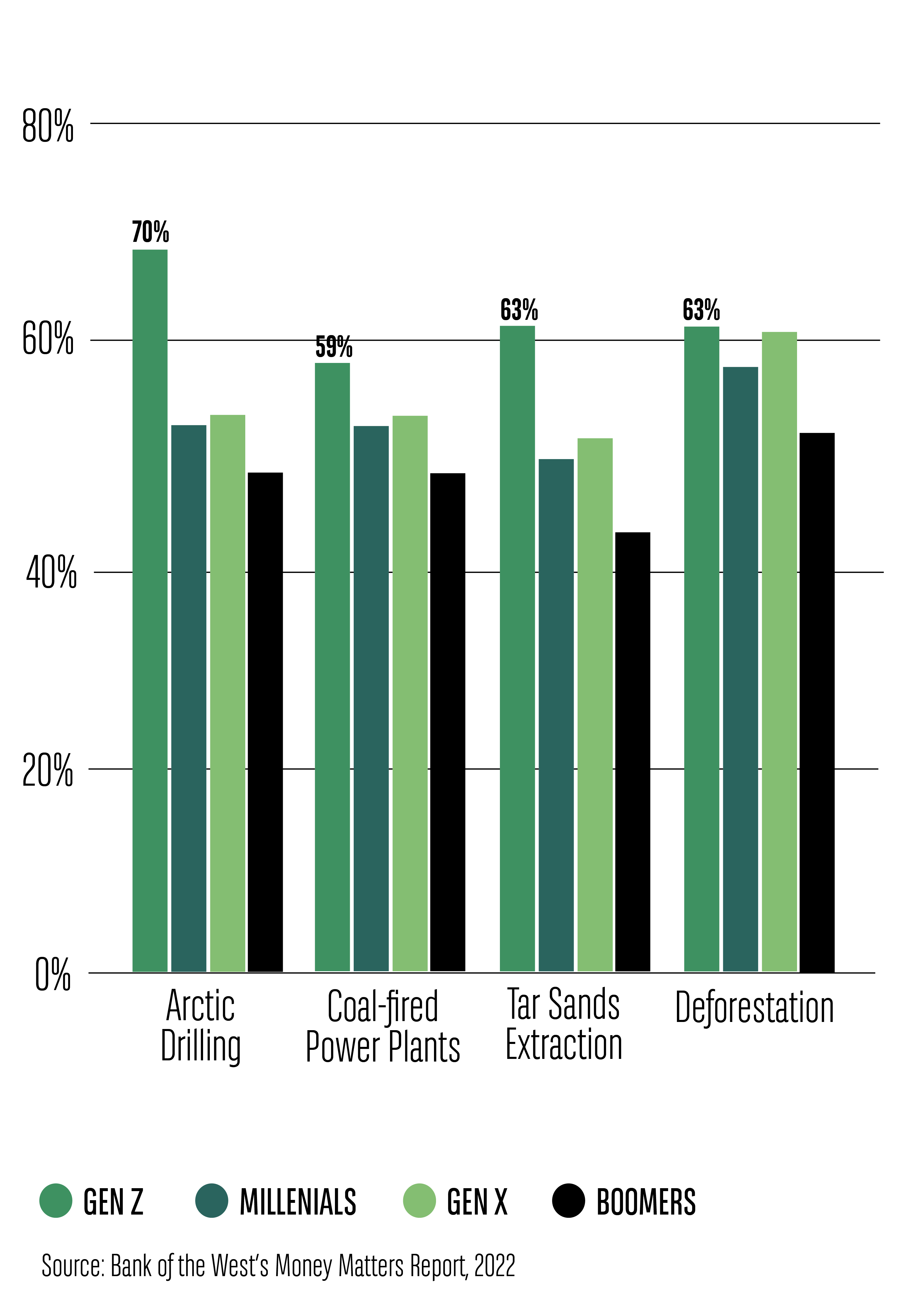 But “if they knew” was a critical phrase in those questions. You can’t take action when you don’t have the info. Currently, 27 percent of Americans are unaware that their bank uses customer deposits to finance new business and projects at all. Closing the knowledge gap between what people want for the planet and what they know about their bank’s financing activities could be a big deal for the planet. Many experts identify the finance industry as a key lever in the fight against climate change.

Consumers’ Awareness of Their Bank’s Role in Climate Change 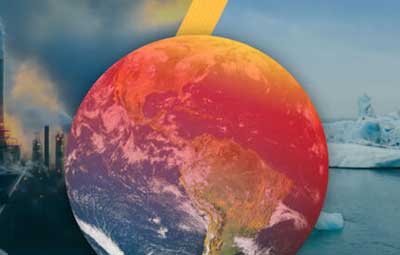 “Finance is possibly the most important lever for the low-carbon economic transition.” Learn why in Who Funds the Fight Against Climate Change?

“Where we put our money and what we finance is what we are putting our hope in the future toward,” said Mario Molina, executive director of environmental nonprofit Protect Our Winters, to Means & Matters in 2021. “And my hope is not with a fossil fuel future.”

“Where we put our money and what we finance is what we are putting our hope in the future toward. ”

While 40 percent of Americans cite convenience as a reason to stay with their existing banks, switching accounts is actually a straightforward process. In one high-profile move, The Conservation Alliance ended its relationship with Bank of America in 2020 over concerns about the institution’s financing practices and environmental commitment.

Sustainability Is Becoming a Business Priority

Businesses are responding to consumers’ sustainability expectations. While brands like Patagonia have long been outspoken about the environment, sustainability is now top of mind across the business world. Fifty-nine percent of business decision-makers include environmental sustainability as a key pillar of their CSR strategies. Seventy-seven percent say their company is acting to fight climate change. Still, 49 percent of decision-makers say businesses and corporations as a whole are not doing enough.

How important is it for brands in the banking or finance industry to take action to fight climate change?

While nearly all business respondents—98 percent—say it is important for the financial industry to fight climate change, 49 percent believe financial services companies are making too little effort.

Importantly, the survey found, companies on the leading edge of the purpose-driven movement have found a new competitive advantage in the sustainability-saturated marketplace: finance.

Other key findings from the survey of business decision-makers include: 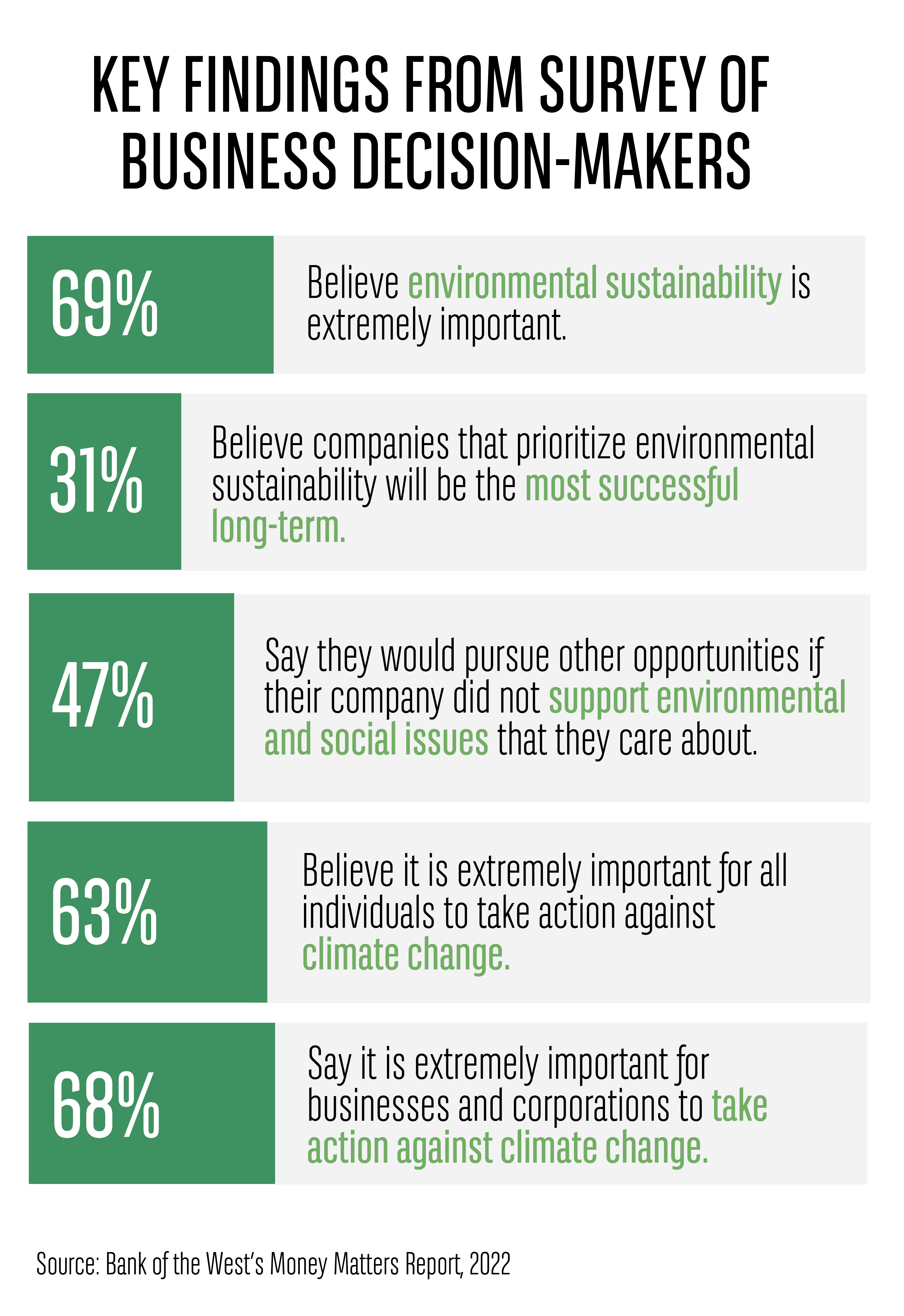 Consumers and Businesses Include Equity in Sustainability

The environment isn’t the only sustainability issue American consumers care about—they also have strong feelings about racial and gender equity. Gen Z leads here, too, as 88 percent say they are passionate about racial inequality and discrimination, compared to 79 percent of Millennials, 70 percent of Gen Xers, and 65 percent of Boomers.

Caring about racial and gender equity is reflected in how people of all ages shop and relate to businesses.

80% of Americans believe that a company taking action for diversity, equity, and inclusion in both the employee and customer experience is important to consider when shopping
86% feel the same about the importance of a company helping local communities
49% frequently or always shop with brands whose values reflect their own

These attitudes represent an opportunity for the business world. Fifty-nine percent of companies with CSR and ESG plans or current implementations reported increased profitability in the last two years—compared to 23 percent of businesses without such plans or programs.

A New Era in Conscious Consumerism is Underway

Consumers’ interest in using their money for good certainly isn’t new. But the Money Matters report shows how conscious consumerism is moving beyond purchasing the occasional eco-conscious product to a mindset that affects everything they do with their money—including their choice of bank.

Consumers don’t just want to buy sustainable goods, but to patronize sustainable companies. Their definition of “sustainability” is growing to include social equity as well as environmental issues. And Gen Z, the new generation of consumers who will drive future demand, leads the way with a more comprehensive commitment to the conscious consumer lifestyle. As consumers continue to learn more about companies’ impact on the world, we can expect them to take even more action to direct their money toward brands that protect the planet and its people.

For a deeper dive into “Bank of the West’s Money Matters Report: Revealing the Sustainability Intentions Gap”, take a look at the full report.

6 Films About Women Activists that Defined Their Times

From roles perfected by Katharine Hepburn to Amandla Stenberg, women activists have been inspiring viewers for decades.