Everybody in San Francisco thinks they know Recology, the resource and reclamation company that picks up their garbage. But the employee-owned company, now celebrating 100 years in operation, is much more than trucks, recycling bins, and a mountain of a dump filled with everything from circuit boards to soda bottles. As part of its commitment to educating the public about the importance of recycling, they have run The Art of Recology, an artist-in-residence program that was the first of its kind in the United States. Now such programs exist in several cities, from Portland, OR to Philadelphia, PA.

The residency program was founded in 1990 by environmental artist and community activist Jo Hanson who first took the city by surprise when she initiated her “sweeping the streets” public art project, encouraging each citizen to take care of the sidewalks on their individual block. Recology agreed that having artists on their premises, using found objects and reusable materials to create work, was part of their mission to educate the public about the importance of recycling. Since then, artists have created assemblages, sculptures, installations, tapestries, and interactive artworks, demonstrating that if you have the imagination, nothing is disposable.

“We thought it was a good way to show what you could do with waste, rather than throwing it away,” says CEO Mike Sangiacomo who is pushing for an initiative on the California ballot taking aim at the plastics industry. San Francisco fell short of achieving a zero waste goal set for 2020, but it remains committed to zero waste with ambitious targets to reduce citywide refuse generation by 15% and material sent to landfill or incineration by 50% by 2030. Still, San Francisco leads as a model city when it comes to waste management. “We try to find ways to prevent more material going into landfills, to recycle more, to compost more,” Sangiacomo says.

“You have to figure out how to use what you are given in ways that are less expected … It really exercises your creativity muscles.”

—JD Beltran, board member, The Art of Recology

Deborah Munk, director of The Art of Recology program, came to the company 20 years ago as an intern. She has since seen dozens of artists, generally 2 to 4 at a time, come to studios at the site for four-month residencies. At the end of each cycle, there is an opening, often attracting more than 500 people, plus each artist gives a studio talk before finally packing up and making way for the new group. All artists must be San Francisco Bay Area residents and though they may have never used recyclables before, they must assemble work strictly from materials discovered at the dump.

“We are all used to going online and reading about the devastation of the planet but when we have our openings, people connect in a different way,” says Munk. “It touches their hearts and they say things like, I can’t believe someone threw this away.”

A quick overview of recent projects demonstrates just how far imagination can take you with materials that others think are disposable. In 2018, Bonanza—collaborative team of Conrad Guevara, Lindsay Tully, and Lana Williams—staged a fashion show, a commentary on fast fashion by making clothes from discarded industrial materials. UK-born artist and programmer Neil Mendoza found an entire 1980s living room set in the garbage heap and activated it with electronics, also found on site, so that visitors set off music and motion sensors as they entered his display. More recently, Genevieve Quick, also diving into the e-garbage recycling bin, created a sci-fi performance about Planet Celadon, raising awareness of global manufacturing and its impact on the environment while Mansur Nurullah created elaborate tapestries from colorful scraps of fabrics about his Black family’s migration from the South.

Most of the artists were supportive of the idea of recycling and excited by what they found in the dump, even if the primary focus of their work wasn’t on broader environmental issues. They are not required to be activists—in fact political work is discouraged—since members of Recology’s education department lead the tours through the studios, offering information on the importance of recycling and its impact on the environment in a gentle manner.

“As an artist who uses technology, it’s very tempting to use new shiny toys but I’ve discovered you can always misuse this or abuse it, so I reuse stuff when I can to increase the environmental footprint of my pieces,” says Neil Mendoza who graduated from Oxford and teaches at Stanford, but who now is interested in the combination of lo-tech and hi-tech—matching handmade assemblages with the latest digital technology. There are precedents for this in contemporary art, such as Nam June Paik‘s early sculptures incorporating television monitors or the controversial installations by Ed and Nancy Kienholz. “Working at Recology is pretty crazy because you never know what you are going to find. You know you should be in your studio making stuff because you have a show on a specific date but you start to collect more stuff because you are worried about all the good stuff you might be missing.”

For the team at Bonanza who had always used found objects in their work, the experience at Recology was life-altering. “Garbage has now become really central because of the opportunity and excitement of finding things that are a little ecstatic and often times a little dramatic, entirely free and not too precious,” says Guevera who points out that this is a solution for emerging artists working on limited budgets. “We had used found objects in our work before, but after the dump, we had a whole new outlook on life,” says his collaborator, Tully.

Mexican American artist Victor Yañez-Lazcano was the last artist in residence, completing his project in January 2020, just before shelter-in-place orders went into effect. For his project, touching on immigration as the American experience, he took the stitches out of moving blankets and embroidered the U.S.-Mexican border in white across the indigo background. He spoke of the importance of meeting with tour groups coming to the Recology site as expanding his notion of an audience for art. Now Recology is waiting for San Francisco to reopen before their next group of artists can come in. 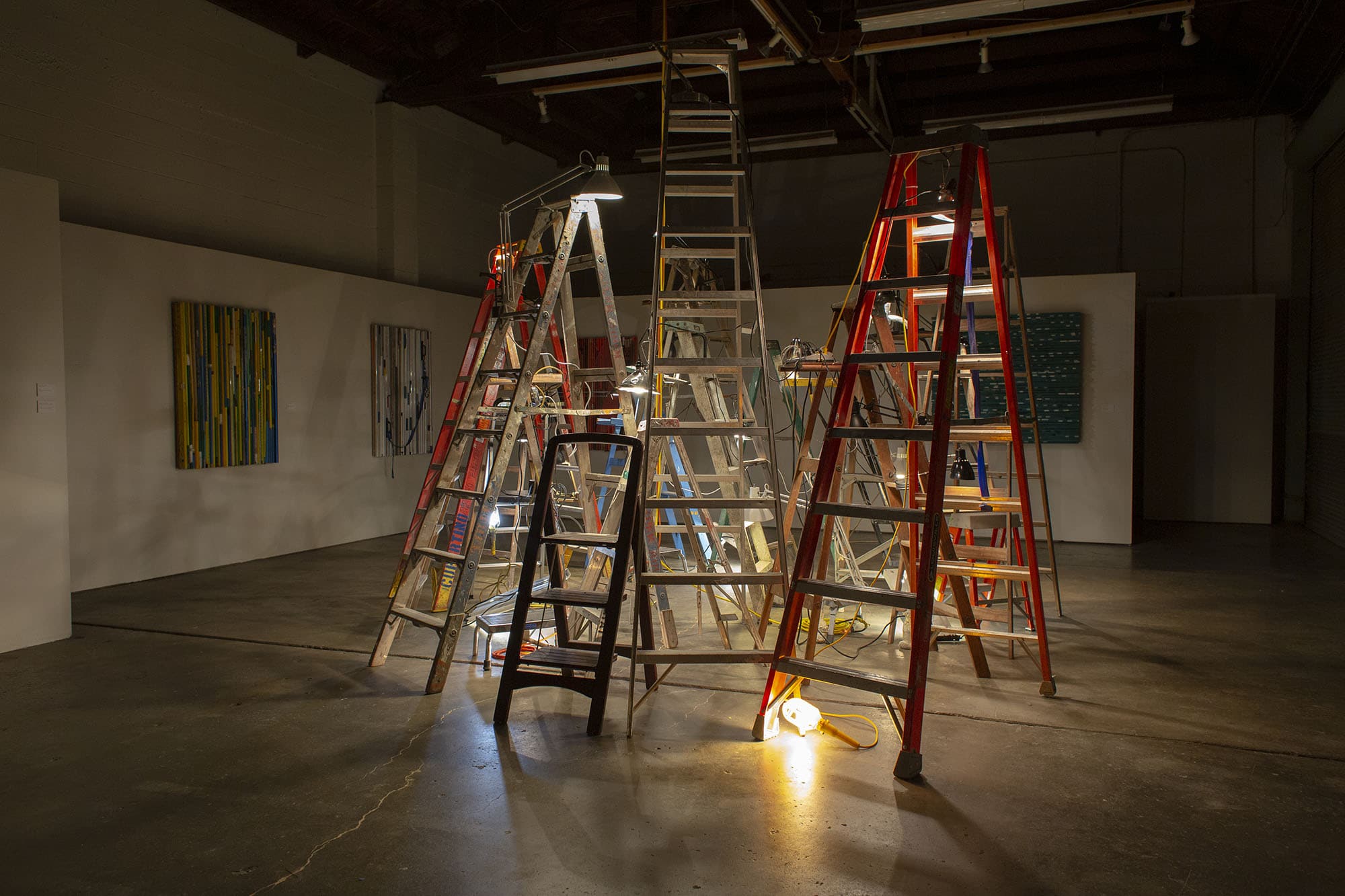 Mexican American artist Victor Yañez-Lazcano, the last artist in residence at Recology before shelter-in-place orders completing his project in January 2020, used moving blankets and ladders to comment on the immigration experience.

All of the artists spoke of how the recognition granted them through participation in The Art of Recology was invaluable, given that traditional galleries usually recoil from showing works made from recycled materials, which can be unstable, ephemeral, and constantly in need of upkeep. Paintings or traditional sculptures are more easily sold commercially. But one artist whose life was truly changed was Mansur Nurullah who went to University of New Mexico 20 years ago, but had been driving a cab for many years since, only returning to art-making later in life. “The biggest shift for me was validation that my work was appreciated,” he says. “I think a lot of galleries are MFA-centric, so just for having an opportunity to show my work was great.” 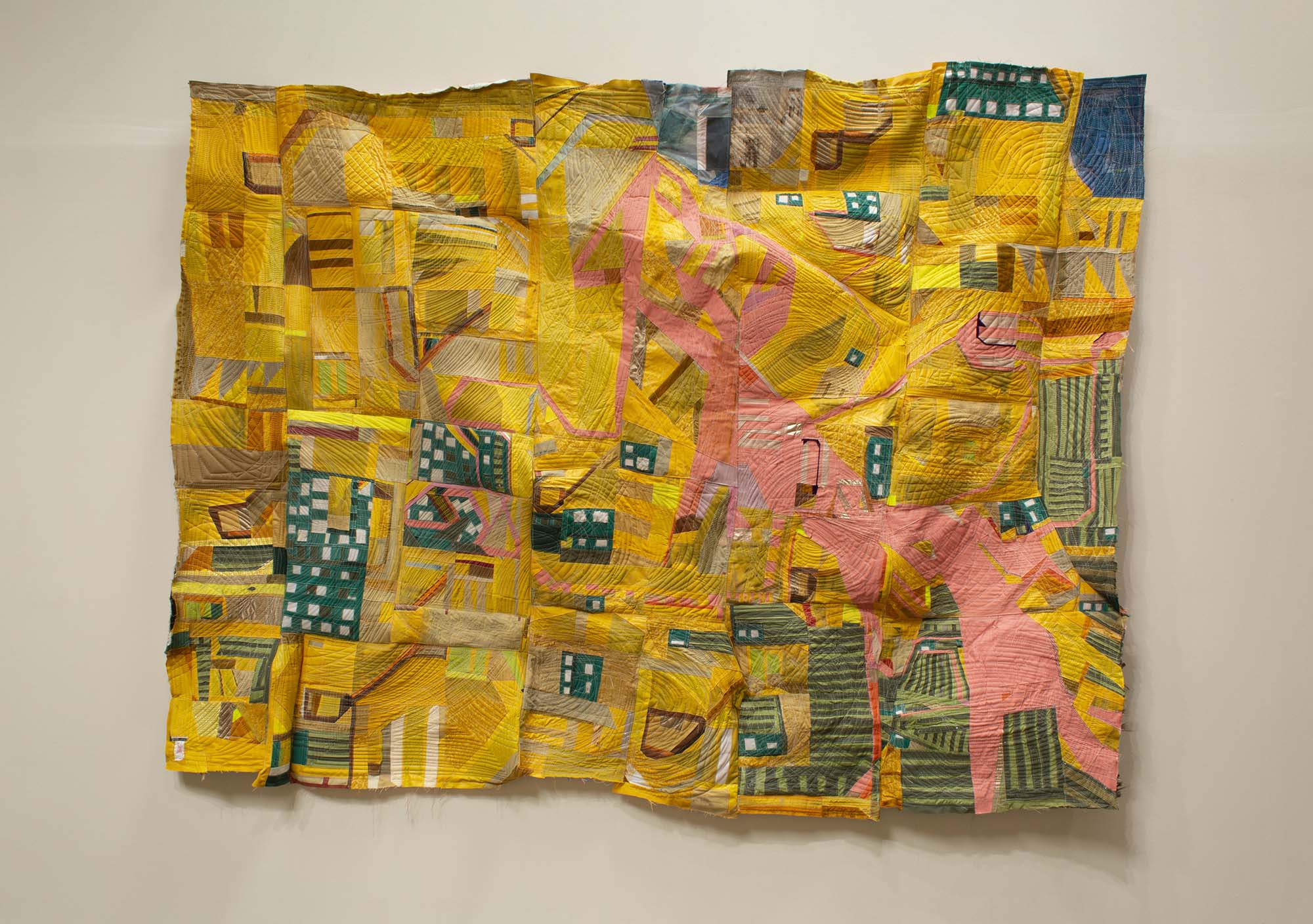 Black artist Mansur Nurullah wove together a range of industrial fabric scraps to tell the story of his great-grandparents’ migration to Chicago from the South.

“We are looking for artists who are doing something inventive in their work that we think would grow and further their creativity by figuring how to work with limited resources,” says board member JD Beltran, an artist and innovator who has just launched the first project of her Center for Creative Sustainability. “You have to figure out how to use what you are given in ways that are less expected, unconventional, that you haven’t thought of before. It really exercises your creativity muscles.”

But most importantly, The Art of Recology, for all it does for the artists, fulfills an important educational function. It teaches people to connect to trash—all those items that they deem disposable—in a different way. Next time you toss away a pair of jeans, an outdated computer, or spoiled left-overs, be conscious of the possibilities of recycling and composting and acknowledge that you can save the planet, one gesture at a time.

It can be hard sometimes to stay up-to-date on what’s happening with the climate emergency. Yet, the need to live a sustainable life is as urgent as ever if we’re going to reverse climate change.