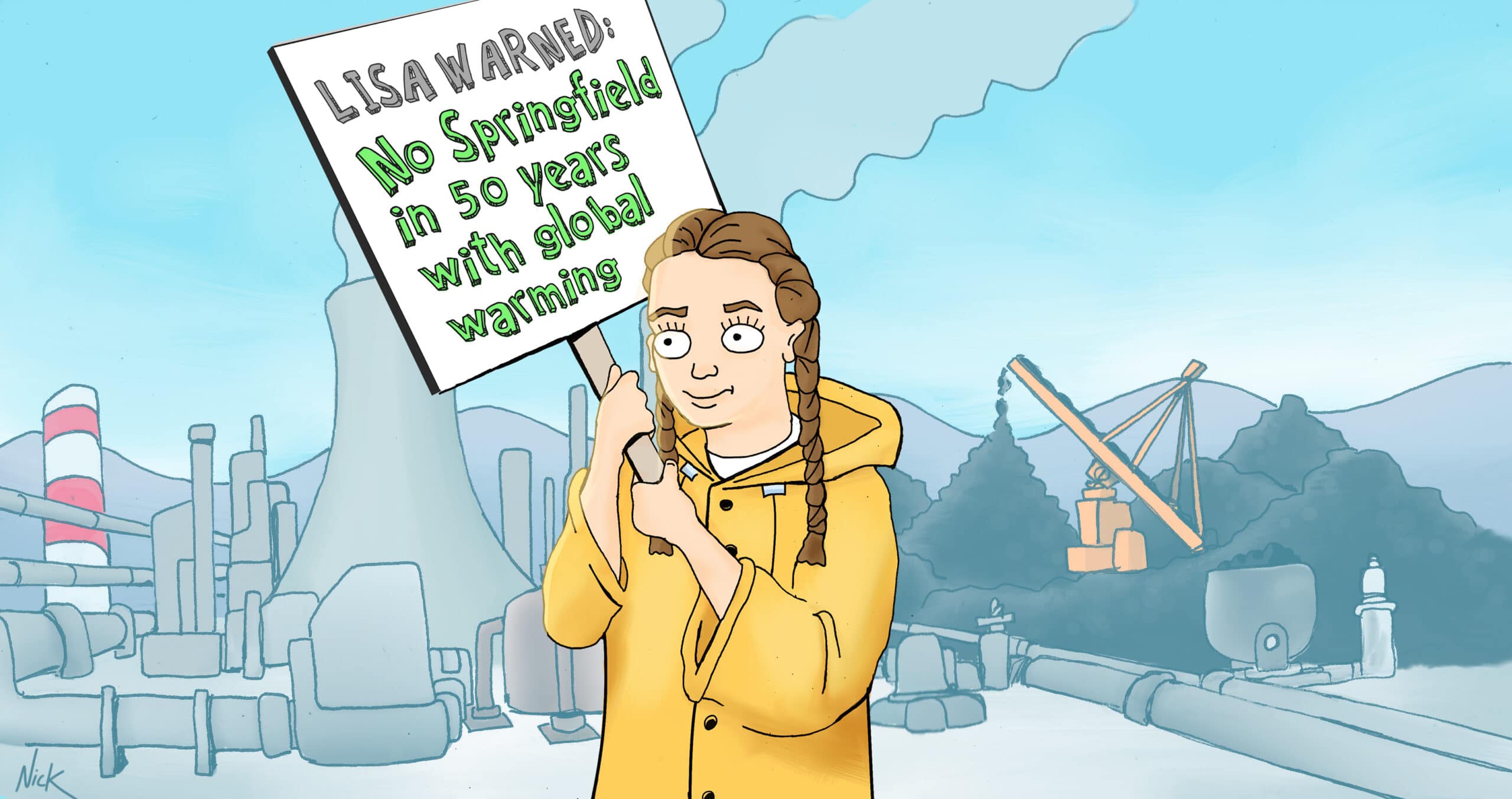 Lisa Simpson Was the OG Greta Thunberg. Over 30 Years Later, She’s Still Got It

Over the last 30-odd years, a yellow cartoon nerd with a sunburst hairstyle and a string of pearls has alternately annoyed and inspired Gen X, millennials, and Gen Z alike. Eternally eight years old, but forever looking out for future generations, Lisa Simpson has starred in magazine articles on the future of feminism, learned vegetarianism from Paul McCartney, and worked to save the environment, from recycling to protecting old-growth trees.

As voices on both left and right have observed, she has more than a passing resemblance to Greta Thunberg. In fact, Lisa was the world’s Greta before Greta was the world’s Greta. In 2009, when Greta was only six, eight-year-old Lisa was giving a passionate presentation on the doomed planet, a precursor of Greta’s viral speech to the UN 10 years later. 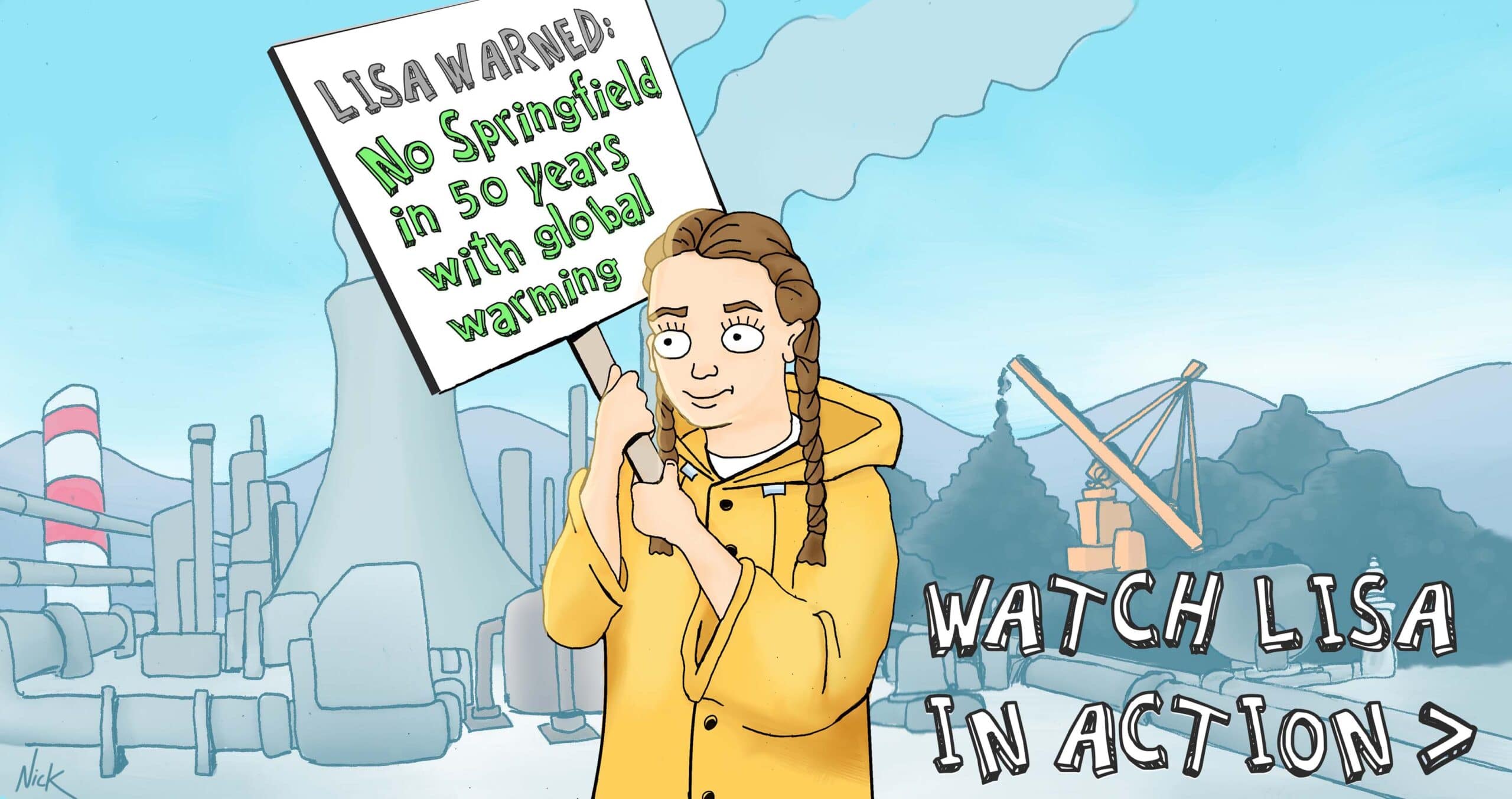 A creation of Gen X, often scripted by boomers, Lisa embodies 90s concerns from ocean death and nuclear power to globalization and pollution, but has found new traction with Gen Z. Solemn, bold, ambitious, and hyper-intelligent—yet cute, playful, childlike, and vulnerable—she’s the perfect protester for the TikTok-to-treehugger generation. 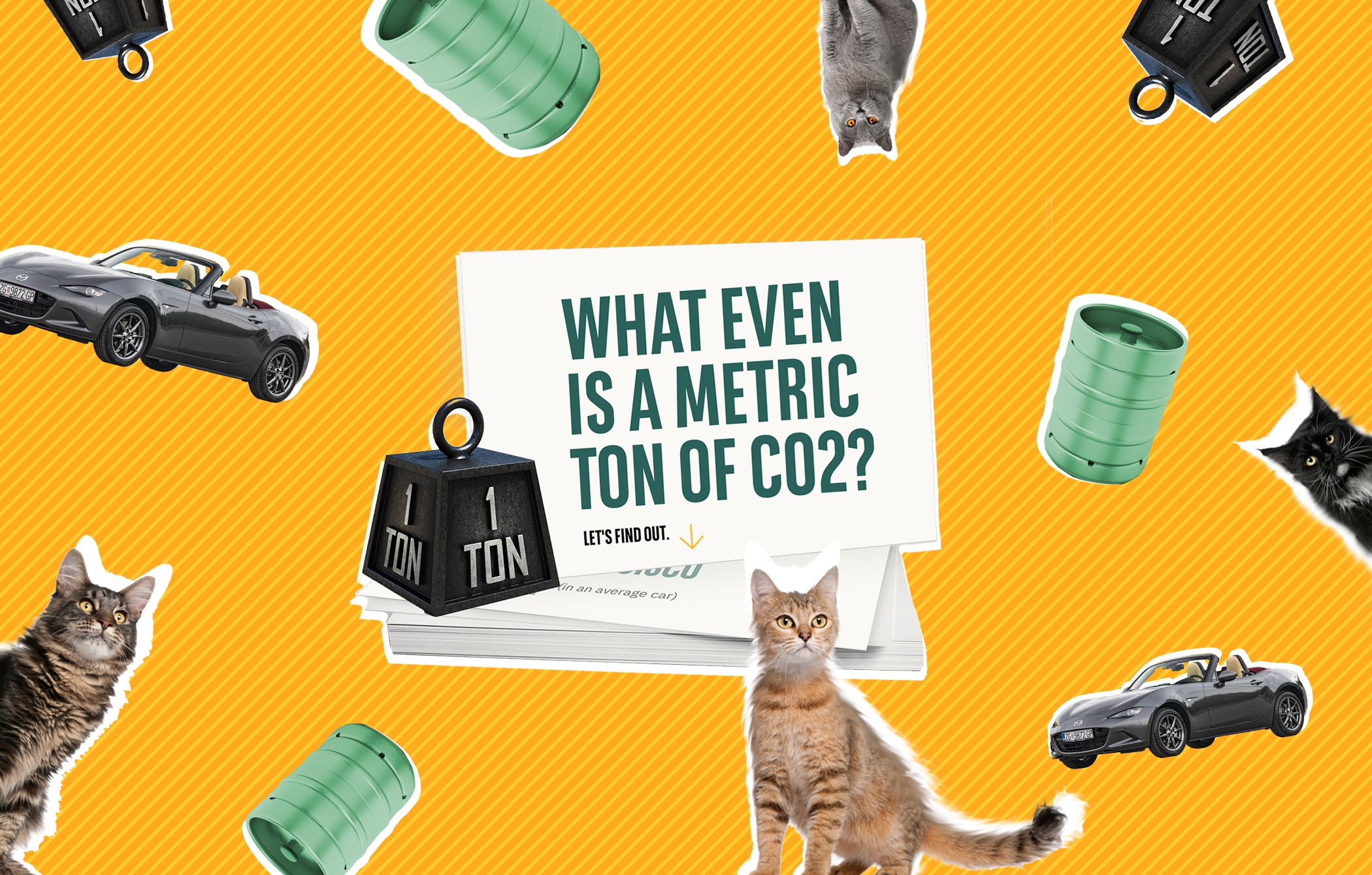 What does a metric ton of greenhouse gases even look like? Find out in our Guide to CO2 Told by Cars, Cats & Kegs.

“Lisa is the social conscience of The Simpsons. She is the bright yellow face of the show’s political activism, the pint-sized embodiment of its counter-cultural sympathies,” environmentalist and Simpsons critic Chris Turner wrote in his book Planet Simpson: How a cartoon masterpiece documented an era and defined a generation.

The environment has been central to The Simpsons from the beginning. Creator Matt Groening told a British reporter, “In conceiving the show, I made sure that Homer worked in a nuclear power plant, because then we can keep returning to that and making a point about the environment.”

The decrepit yet sinister billionaire Mr. Burns is the face of planet-crushing greed in all its forms, from running a plant so toxic that three-eyed fish appear to con Lisa into supporting a recycling project that secretly scours the oceans. 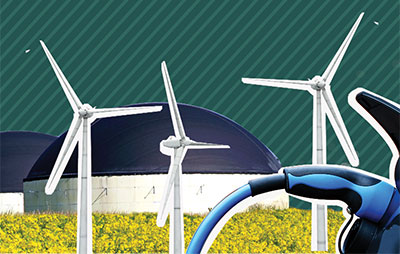 Questions about the UN climate conferences and the Paris Agreement? Read our explainer, here.

Youth environmental activism is even older than Lisa Simpson, of course. From protests in 1967 by Black students against a deadly garbage dump in Houston, to student protests in 1970 that spawned Earth Day, to 12-year-old Canadian Severn Cullis-Suzuki addressing the UN Earth Summit in 1992, and to the 8 teens who came together to cofound the nonprofit Earth Uprising, recent history is full of environmental activism by young people. Lisa Simpson, however, was perhaps the first to reach icon status.

Xiuhtezcatl Martinez, now 20, the indigenous activist and youth director of the Earth Guardians youth leadership movement, made his mark on climate issues even younger than Lisa, aged just six. He gave a keynote at Bank of the West’s Philanthropy Awards last year.

As The Simpsons’ social justice warrior in residence, Lisa’s similarities to Greta run deeper than just environmental commitment. Both are gifted: Greta graduated high school with excellent grades, despite distractions such as the Nobel Peace Prize nomination and a transatlantic sailing trip, while Lisa is a child prodigy. Both love to write and have won essay competitions: Lisa’s took her to Washington, while Greta’s launched her activist career. 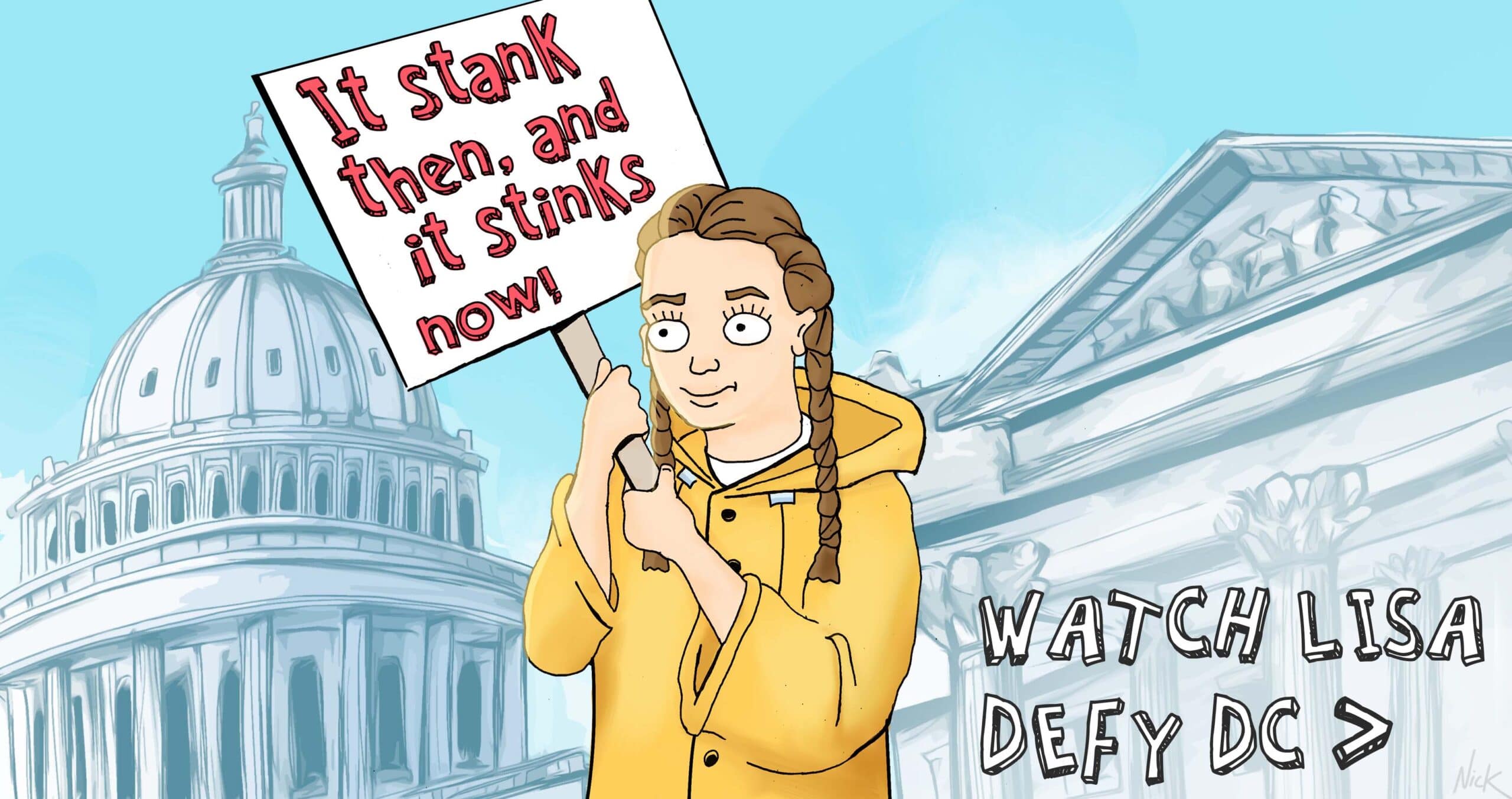 Neither eats meat—although Greta is vegan and has persuaded her father, an actor who clearly doesn’t share Homer’s love of pork chops, to join her. And the pair are outsiders: Greta was bullied at school, Lisa struggles to make friends, and both have been on the receiving end of hostile press.

A dazzling cast has cameoed on The Simpsons, from Buzz Aldrin to Stephen Hawking to Chrissy Teigen. And Yeardley Smith, who’s lent Lisa her distinctive voice since 1989, would love to see Greta join them.

“She’d be passing through Springfield and find that she has so much in common with Lisa,” she told an interviewer. “But the heartbreaker would be when Greta moved on to her next stop and Lisa would be with all those people in the town who wish she’d just keep her trap shut. She’d have to carry the torch for the rest of time on her own.” 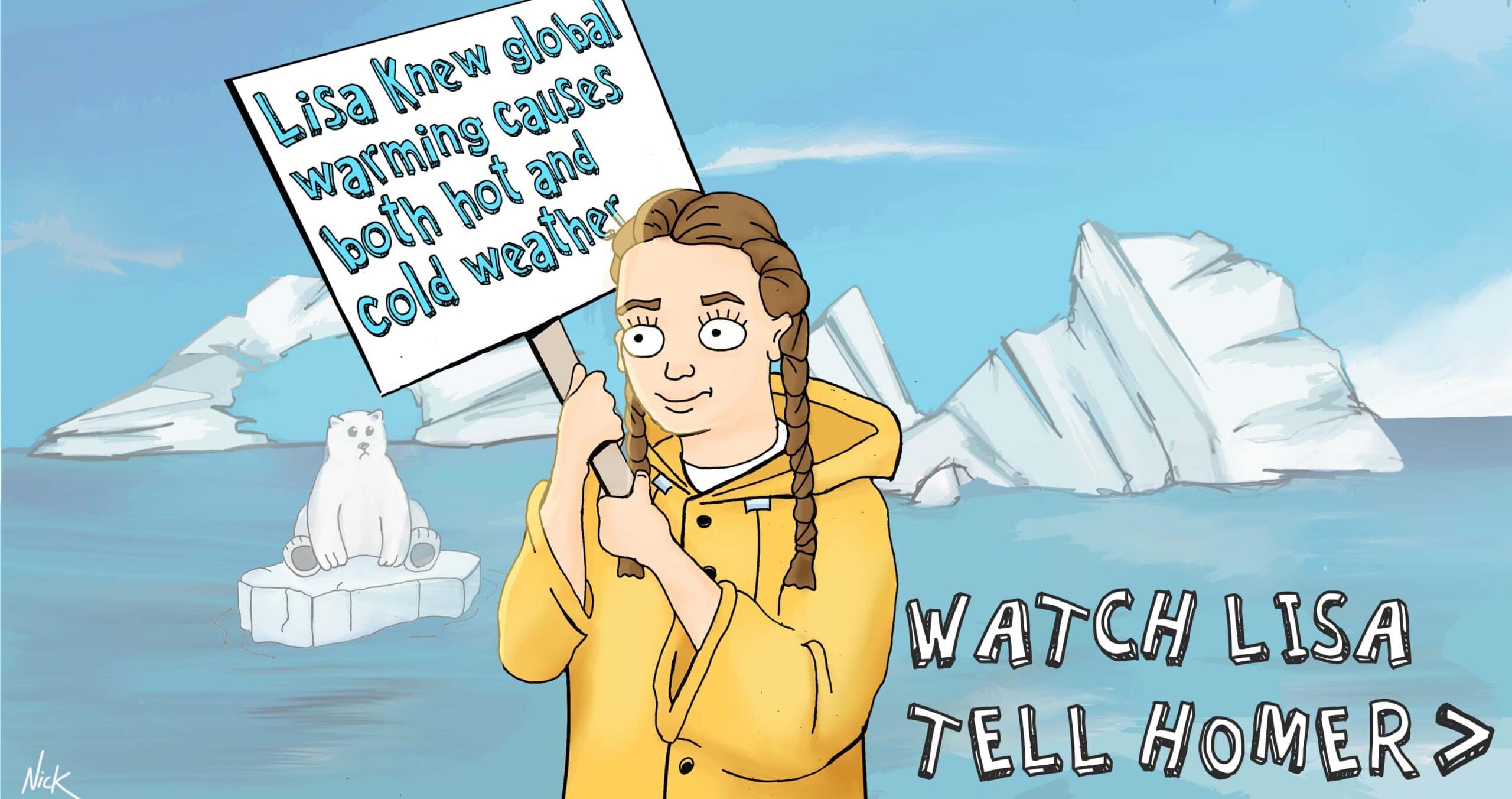 It’s certainly tempting to imagine how an episode with Lisa and Greta would play out. Would Greta sail up the Springfield River? Would Mr. Burns have an environment-shattering plan to foil? Would Lisa be able to resist the urge to compete with another prodigy? Most importantly, would Lisa, so thirsty for grades and approval, really support something so radical as a school strike—even if it was in honor of Greta’s rather mainstream goal of holding the world to its Paris Agreement commitments? Or might she follow her fellow education proponent Malala Yousafzai’s lead in saying of Greta, “She’s the only friend I’d skip school for.”?

Environmentalists and climate deniers alike have compared the two. Denialists love to frame Greta’s righteous anger as Lisa’s childish passion, while activists often cast hostile politicians as Greta’s Mr. Burns. What might connect them most is their precocious seriousness and global-attention-grabbing persistence. Sure, other environmental activists exist who share their views. But Lisa and Greta, each in their own universes, stand as physically small beings with unexpectedly powerful and righteous voices in worlds stacked against them. Both are utterly unintimidated and undeterred by critics—the opposite way children, and girls, in particular, are expected to behave. And both girls seem to take on their role out of exasperation, rather than a love of attention. Their steely-eyed efforts appear to be sacrificial—a childhood traded for a better world.

Inspirational, inflammatory, and Lisa-adjacent as she may be, though, there are no plans for Greta Thunberg to be a guest voice, a rep confirms, noting that: “Certainly that could change in the future.”

Like Greta, Lisa has long polarized people: to some, the annoying, priggish little sister, to others a righteous but adorable campaigner. And, over time, public opinion has become more aligned with her once-radical views. Vegetarianism, which led Lisa’s family to ostracize her in 1995, is now a fairly common choice, particularly among young adults, and producers of vegan meat substitutes have been valued at billions of dollars. And few would mock a child today for protecting a blue whale, as Springfield’s citizens did in 2010.

What might Greta—and the rest of us—learn from how public opinion has moved toward Lisa as she stood firm over three decades? Keep fighting. For Lisa, as for Greta, who is now approaching adulthood, youth is a double-edged sword. It empowers her to speak truths that adults can’t—but renders her opinions vulnerable to dismissal.

Yet a new generation of activists who wear Lisa’s face on badges, lapel pins, and social platforms alike seem to share the opinion of Simpsons producer Al Jean: “The character we’re closest to is Lisa Simpson, a character who reads a lot and hopes for a better life.”

A few decades from now—and hopefully even sooner—a greater majority of the world may feel the same way about Greta as her progressive environmental activism evolves into the everyday steps people take to safeguard our planet.

Mary Mattingly: The Art of Inter-Action

Multimedia artist Mary Mattingly has been thinking beyond the canvas. The climate crisis, food justice, and sustainable resource management have inspired her to create large-scale works to enlighten and engage.