On a cold, foggy summer morning at a state park in a corner of San Francisco that James Baldwin once said “America pretends does not exist,” something was afoot along the shore of the bay. Dozens of plump squirrels scurried about amid the paths, shrubs, and rocks of Candlestick Point State Recreation Area. A graceful egret waded in the shallows off a rocky beach, bending its long neck to examine the water around its feet. And tucked away off a dirt path leading to the park’s fishing pier, Joe Colmenares was hard at work.

With meditative patience, Colmenares dipped a brush in paint. Over and over again, he applied new color to old planks of wood. Slowly but surely, he continued the process of transforming a drab wooden windscreen into something else: a piece of art. Helping transform the windscreen was his partner, Hazel Barrera, who applied brushstrokes of her own. The windscreen, which stood about the height of a garage door, was coming alive with images of willets, a large shorebird frequently spotted at Candlestick Point, rendered in Colmenares’ graffiti-influenced style. 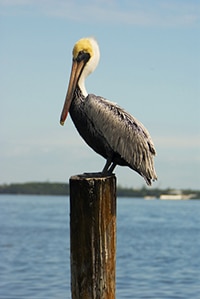 Pelicans, cormorants, and terns are also among the birds commonly found at Candlestick Point.

“With this wall, I think the beauty of it is we get to learn about the willets and how they live within the park, and how they are part of the environment,” Colmenares said. “They’re part of the cycle and part of what makes the park and what brings it alive.”

Colmenares grew up near Candlestick Point State Recreation Area, in the adjacent neighborhood of Bayview-Hunters Point. This southeastern corner of the city has long been neglected and underserved, as evidenced by Baldwin’s “does not exist quote.” Its historical struggles with drugs and crime are documented in songs by some of San Francisco’s most celebrated rap groups. In Cool Gray City of Love, his classic book on San Francisco neighborhoods and history, the journalist Gary Kamiya wrote that “in the urban mythology of San Francisco, Hunters Point plays the role of Mordor.”

Today, Candlestick Point feels particularly removed from the more glamorous sides of its world-famous city. The road leading to the park’s entrance is a slalom of potholes, and during the pandemic became lined with RVs in which people live. Across the street is the former site of Candlestick Park, where the 49ers and Giants once played pro sports before crowds of thousands; the stadium was demolished in 2015 and its former site is now ringed by a chain-link fence. Nearby, cars whoosh down US Route 101 en route to and from San Francisco International Airport. Within sight is a decommissioned Navy shipyard that still has a toxic legacy in the area. It can all feel intensely disconnected from nature.

But to Colmenares and many others, Bayview-Hunters Point is not simply a representation of urban blight. It’s a living, breathing community where people live and work, love and lose, join together and get by. That’s where the 252-acre oasis of Candlestick Point State Recreation Area comes in—and more specifically, where Colmenares’ mural of willets has a role to play in this overlooked corner of a mural-loving city.

Colmenares and many others believe art can help build a connection between the recreation area and local residents. For some, his art might be an additional attraction. For others, it might smooth the transition from urban neighborhood to state park. For others, it might spark questions that deepen their overall appreciation of the park. Perhaps the simplest way to think of his art is as a signal that people care about and care for this place—that it’s a vibrant place ready to be enjoyed, and not another abandoned site like the demolished stadium or toxic shipyard nearby.

“I think that’s our duty and our mission—to change how folks view the Bayview and Candlestick and nature and this particular park.”

“I’m a product of the Bayview, and as bad as it can be, we want to keep the positivity and transform it into what we’d like to see,” Colmenares said during a break from painting. “I think that’s our duty and our mission—to change how folks view the Bayview and Candlestick and nature and this particular park. Because these are beautiful places where beautiful people live, people who want to and continue to give back.”

The Transformational Powers of Art and Nature

As a child, Colmenares had a firsthand view of his neighborhood’s challenges. After an eviction, he and his family lived out of a car for several months while he was in high school. He was homeless at an age when more privileged kids got to worry about driver’s licenses and college admissions.

“Growing up in the Bayview for me was really tough because, to say the least, drugs and violence and poverty are very evident in this part of town,” he says, soft spoken and matter-of-fact about a place others might describe in more colorful terms.

Colmenares says the Bayview was a “prime location” to practice graffiti when he was coming up. The area had plenty of neglected corners to tag and not many authority figures to stop one from tagging them. At around 12 years old, he fell in love with the art form, which was still emerging during his 1980s childhood. He didn’t know then that graffiti would end up changing his life.

A mentor Colmenares met through the local Boys & Girls Club pushed him to expand his artistic boundaries and get serious about developing his natural talent. Colmenares went from simply spray-painting his tag name around town to “wanting to make stuff that stops people in their tracks and sparks inspiration and action.” He landed a partial scholarship to the San Francisco Art Institute, where he earned a bachelor’s degree in graphic and web design. Today, art—and using art to impact young lives—is his full-time job.

Along the way, Colmenares never forgot about Candlestick Point, which functioned as a playground of sorts during his childhood—and a reprieve from the more gritty aspects of the area.

“It’s literally our backyard,” Colmenares says. “Coming over here, playing as a kid, enjoying the nature—now being able to come back as an adult and use art to impact and serve the community gives me a feeling of full-circle.”

View of the San Francisco Bay from Candlestick Point.

Built atop landfill, Candlestick Point has a unique backstory of its own. In the 1970s, community members from Bayview-Hunters Point mounted an environmental justice movement in their neighborhood, fighting for improvement to their degraded waterfront and its legacy of pollution. After lobbying from community members, the California State Legislature voted in 1977 to establish Candlestick as a state recreation area; it was the first urban state recreation area in California.

“When people think about state parks in general, they think wilderness parks,” says Kindley Lawlor, president and CEO of Parks California, a nonprofit that works to support and promote California’s state parks and recreation areas. “But there are a few key urban parks in the California State Parks system.”

In addition to Candlestick Point, Rio de Los Angeles State Park and Los Angeles State Historic Park are urban parks in the state system. Expanding access and equity around state parks is a key part of Parks California’s mission. As part of this push, the nonprofit and a group of other local organizations worked with Colmenares to produce a series of murals at Candlestick Point, including his windscreen willets. The idea is to draw people in, catch their attention, and build a connection between the park and its surrounding neighborhoods.

“There is mounting evidence…that nature has benefits for both physical and psychological human well­-being.”

“There is mounting evidence, from dozens and dozens of researchers, that nature has benefits for both physical and psychological human well­-being,” Dr. Lisa Nisbet, a psychologist at Canada’s Trent University, told the American Psychological Association in an interview last year.

That’s a big reason why Parks California and many others want to make urban nature areas in particular more accessible and inviting. A statewide program is aiming to improve equitable access to state parks for people across California.

“We’ve been talking a lot about how people need to develop their own relationships with nature and parks,” Lawlor says. “They shouldn’t be brought somewhere and told, ‘OK, now you have to hike.’ This is about what makes you want to come back to these places—and that can be just sitting at a bench looking at the water and escaping the city noise for a couple hours. That’s why, even though it’s not as typical to see urban parks in the system, they are so important.”

Colmenares has a clear idea of what he wants his art to spark in park-goers.

“It starts a conversation around ‘What is that? Why is it here?'” he says. “And that might change their view of the park. They might feel connected as they see the images and learn about them. Maybe they’ll feel ownership and want to preserve the images or the park or the nature. If you see that image, you can carry it for the rest of your life. That’s a memory.”

At a picnic table near the windscreen that was coming alive with his graffiti-inflected willets, Colmenares broke down his creative process for the project.

In a few days, Colmenares was scheduled help host a youth day camp at Candlestick Point produced by the Oakland-based group HipHopForChange, which works to use music, dancing, graffiti, and other art forms to empower and educate young people. The hope was that it would inspire youth to follow in Colmenares’ footsteps of using art to improve their own circumstances as well as uplift people around them.

“Our goal is to have young artists that, like me, have grown up in the community continue to do work in the community by creating artwork that continues to tell a story, to continue the legacy of preserving this park and nature and the environment for future generations,” he said.

That aligns with Parks California’s goal of expanding the notion of state parks—and who and what they are for. Professional-class people spending their weekends tromping through forests in expensive, trendy gear doesn’t have to be the default image of what enjoying the outdoors looks like.

23: Percentage of visitors to national parks who are BIPOC.

The way Colmenares sees it, there’s even a direct connection between his artwork and the Hunters Point Expressway, the road that leads to the entrance of Candlestick Point State Recreation Area. The expressway has fallen into disrepair, with cracks and potholes creating a bit of an obstacle course for anyone arriving at the park by car.

“How do we get these families to come enjoy the park? We have to literally pave the way,” Colmenares said. “And this project is that—we’re paving the way to make it welcoming, inviting, educational, and a place we can enjoy and work on and grow together.”

6 Films About Women Activists that Defined Their Times

From roles perfected by Katharine Hepburn to Amandla Stenberg, women activists have been inspiring viewers for decades.