Sustainable Business • Entrepreneurship
from BANK OF THE WEST

Playing with Paint to Save the Planet

How an entrepreneur's journey to selling on Amazon started with a mission.

It all started in a garage. With a bucket of paint. And a pair of pantyhose.

Brian Brittain was working at a recycling facility in Southern California when he noticed that leftover paint was dropped off more than any other product. He decided to experiment with recycling the paint himself, and the pantyhose (borrowed from his wife) were just one of many filtering methods he jury-rigged. 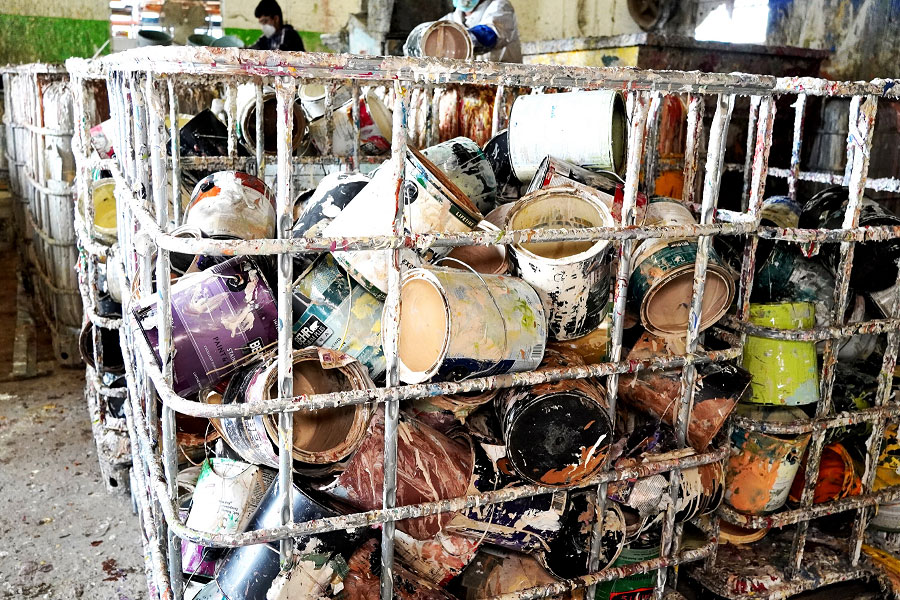 The going wasn’t easy. There was no blueprint 20 years ago for giving a second life to used paint and no clear sign Brittain’s plan was going to work. But he knew there was a problem that needed solving. In the early 2000s, the EPA estimated that every year Americans discarded 65 to 69 million gallons of paint (enough to paint two bedrooms in every home in California). So, Brittain believed he had an idea worth chasing.

25%: The amount of things Americans put into the recycle bin that goes into landfills because of contamination.

“What really drove me was what we could do for the environment,” says Brittain. “And I saw a business opportunity—that we could create something profitable using this abundance of low-cost material that’s just sitting around.”

Two decades later, he’s invented a paint recycling process, and turned his fledgling garage experiment into a successful enterprise. Though the story of American recycling has been a sad one lately as rates of recycled materials rerouted to landfills are on the rise, Brittain’s success stands in stark, encouraging contrast. Brittain’s path from garage to Amazon is an inspiring tale with lessons for others in entrepreneurial creativity, perseverance, and foresight. 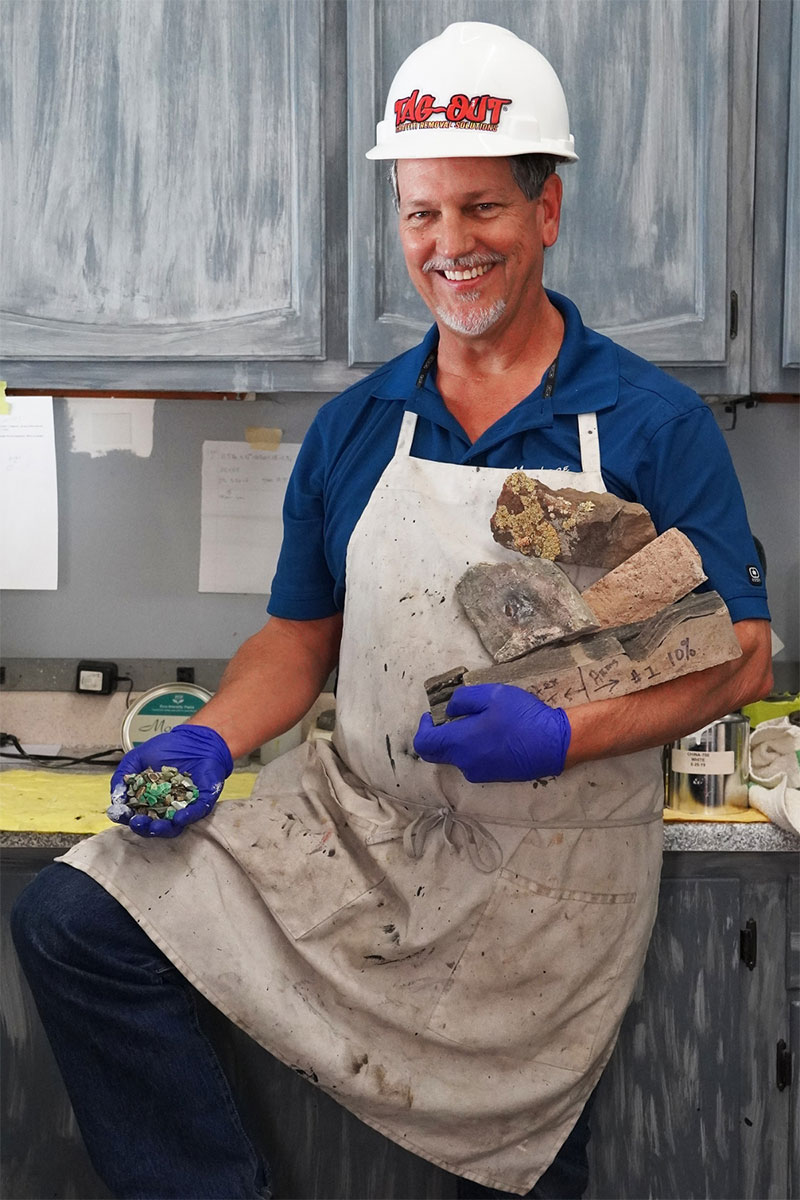 Montage Paint is available online and in stores across the country. The Azusa, California-based company recycles about 10,000 cans of paint per day. Between 2015 and 2019, Montage Paint gallon sales quadrupled, and the company has plans to open its first storefront in the Southern California city of Hemet.

TEST AND LEARN: WHY PLAY WITH PAINT?

It wasn’t obvious at first that Brittain’s end product would be paint. In a little lab at his warehouse, he embraced experimentation. In the spirit of Sir James Dyson’s 5,126 failed vacuum designs or Thomas Edison’s 1,000 attempts at a working light bulb, he created all sorts of products, successful and otherwise, out of old paint. He tried to turn paint into a concrete additive—which, unfortunately, made the concrete weaker. He made stone veneer that was beautiful but wasn’t financially viable to scale up. He even successfully produced and later patented soft rock, a type of ground cover that resembles gravel.

“From the beginning, there’s always been all sorts of experimenting with what we can actually turn the paint into,” says Jesse Walter, chief marketing officer at Montage Paint. “We haven’t had any of our experiments blow up or burn to the ground, but there’s been a lot of trial and error.”

And while the experimentation continues to this day (new products are patent-pending), the initial conclusion of Brittain’s R&D landed him right back where he started: The product they could most effectively mass produce from old paint was new paint.

RESOURCEFULNESS: THE WIN-WIN OF UPCYCLED PAINT

Paint became the winning end product because of simple math: The materials required to make upcycled paint—primarily, old paint—are cheaper than those needed to make new paint. So the result is an environmentally friendly product of similar quality to traditional paint that sells at a competitive price. Win-win-win.

Montage Paint sources discarded paint from nonprofits like PaintCare that collect people’s old paint at recycling events. Montage Paint sorts cans by color and sheen, and then the paint goes through a filtering system. The company then adds a very small amount of new ingredients to increase the quality. The recycled paint looks, acts, and performs like traditional paint sold by name-brand retailers.

Montage Paint is available in 150 retailers across the country, as well as online at Amazon.com and Walmart.com. Walter says they plan to open several storefront locations in the coming years. “It’s been pretty rapid,” he says. 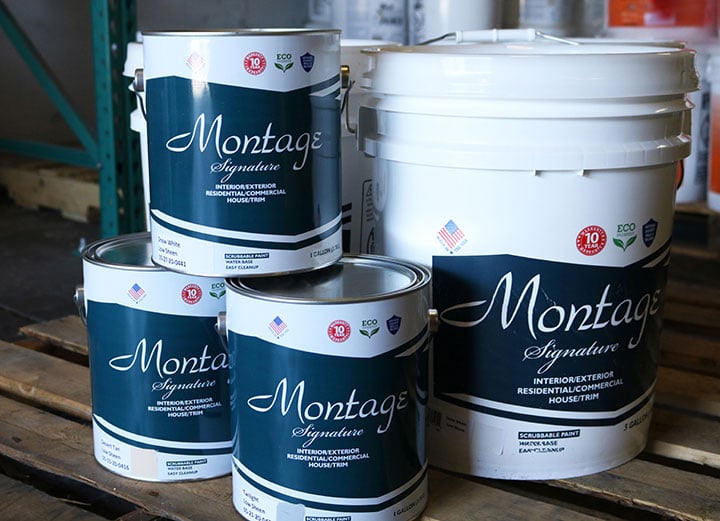 A garage experiment became a product now sold through 150 retailers and online.

WHEN TO SCALE UP VS SCALE BACK

Just like their product, Montage Paint’s business model was a result of trial-and-error. With such a unique product, determining how to sell it, where to sell it, and to whom wasn’t immediately clear.

At first, Montage Paint attempted to keep up with traditional paint brands and retailers, creating and offering more and more colors, until the business was offering literally hundreds of colors. But upcycled paint colors—like bright yellow and bright red—require specific colors of old paint to make. And since Montage’s supply chain is dependent on whatever’s dropped off for recycling, creating colors on-demand wasn’t always possible. Offering a broad selection meant that some orders couldn’t be fulfilled on time. Customers grew frustrated with the lack of availability and long waits. And with a catalog that advertised all those colors, there was no fix in sight.

A hamburger, fries, and a Coke. We cut out all the noise, and stuck to what we were good at.

We were trying to be all things to all people,” Walter says. They soon realized that wasn’t realistic. They didn’t need to be the Home Depot of paints; they just needed to be Montage Paint.

So, they streamlined. The business zeroed in on what they could reliably produce and deliver.

“A hamburger, fries, and a Coke,” Walter says, using the no-frills fast-food franchise In-N-Out Burger as an analogy. “We cut out all the noise and stuck to what we were good at.” 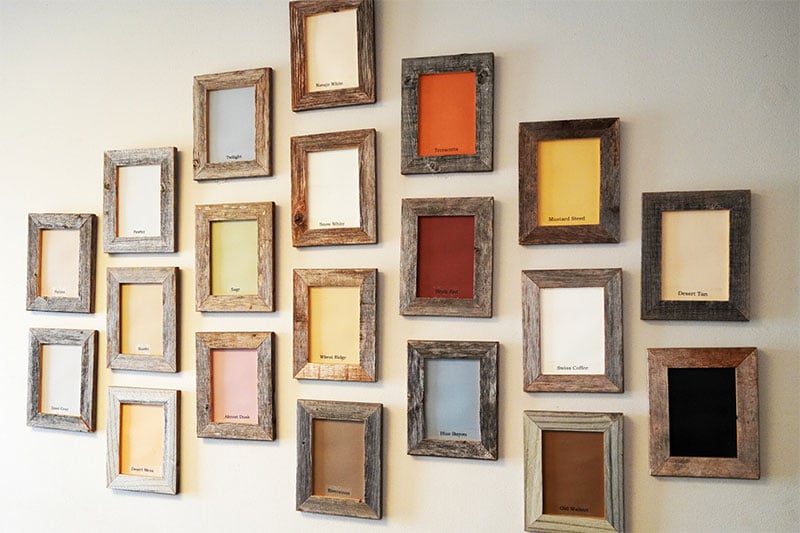 The scaled-back approach paid off, and they began to expand about four years ago. After initially selling locally to contractors and homeowners, they branched out to Amazon.com, followed by retail stores across the country. They landed larger retailers, including Ace Hardware, True Value, and Walmart.com in the last year.

Growth faltered momentarily in early 2020 when the pandemic broke the supply chain. Due to shelter-in-place orders, the recycling events where people drop off leftover paint came to a halt. Montage Paint’s source of raw material disappeared. But later, when shelter-in-place orders lifted, a more favorable challenge emerged: keeping up with exponential demand as people dove into home improvement projects in the middle of the pandemic.

ON THE LOOKOUT FOR THE NEXT BIG (WEIRD) THING

Brittain’s entrepreneurial approach to addressing an environmental issue has already paid off—and it could be just the beginning. Montage Paint is in the process of patenting new products, and Walter believes there are many more business opportunities for entrepreneurs willing to tackle environmental problems.

“There are lots of products that need to be recycled into the next sustainable thing,” Walter says. “It would be great for entrepreneurs to be encouraged to solve problems in recycling through business.”

From attending conferences and speaking with recycling industry colleagues, Walter has learned that the opportunities are endless. He knows a guy who grinds mountains of old toilets into porcelain gravel that is then used in manufacturing. He knows some folks are currently trying to decide what to do with the black powder from old ink cartridges.

It would be great for entrepreneurs to be encouraged to solve problems in recycling through business.

A Plan to Recycle the Unrecyclable

“There are all sorts of weird, neat businesses to create,” he says.

And all sorts of environmental problems to be solved. While the future of the American recycling industry and its blue bins is uncertain, opportunities for innovation abound. New ventures are creating straws out of seaweed and toys out of milk jugs. All it takes is the right idea and gumption to try, try, and try again until you find just the right way to turn some old junk into the next new, sustainable—and profitable—product.

A former screenwriter shares her story of sustainable food.