Sustainable Business • Entrepreneurship
from BANK OF THE WEST

Lipstick with a Purpose: One Founder’s Mission to Elevate Bossy Women

Before meetings, former investment banker Aishetu Fatima Dozie used to apply a bold lipstick—one favorite was hot pink. Then she’d snap a selfie and send it to friends she describes as “boss women.” The bold lip color was one way of boosting her confidence as she navigated a predominantly male profession. Dozie and her boss women friends began buying new lip shades to send to each other. The lipstick exchange created a sisterhood among these ambitious, feminist, and feminine professionals and reminded them to live bold, courageous lives.

But, the fast-paced lifestyle was taking a toll. Dozie experienced a panic attack and ended up in a hospital, where she was diagnosed with severe hypertension. The mom of three boys decided to trade in her corporate career for the two aspects of her professional life that had brought her the most joy: lipstick and bossy women. 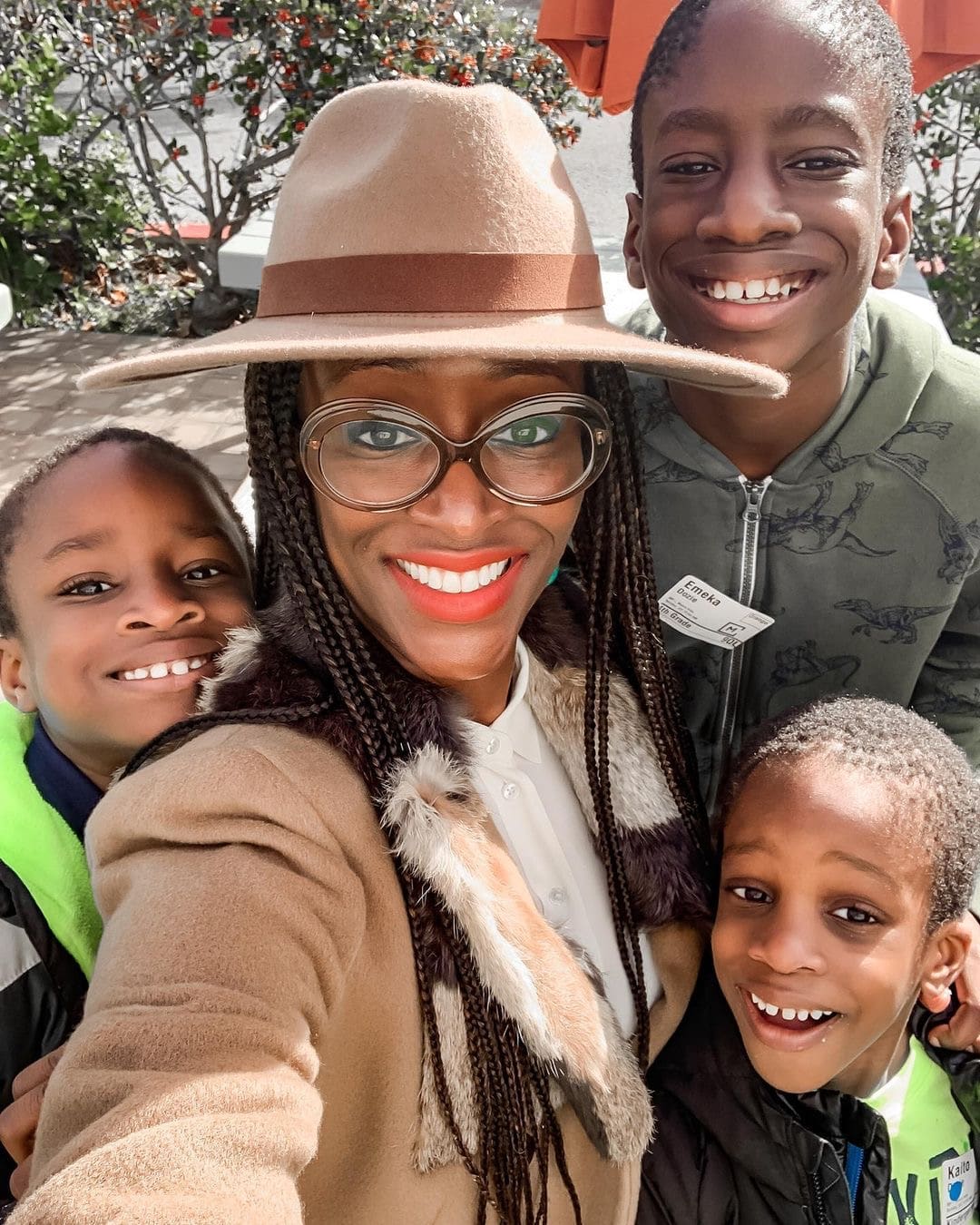 Founder and CEO Dozie is also mom to three boys.

“I want to inspire women to truly claim being ambitious as a wildly positive concept, and to claim being feminine and also feminist.” 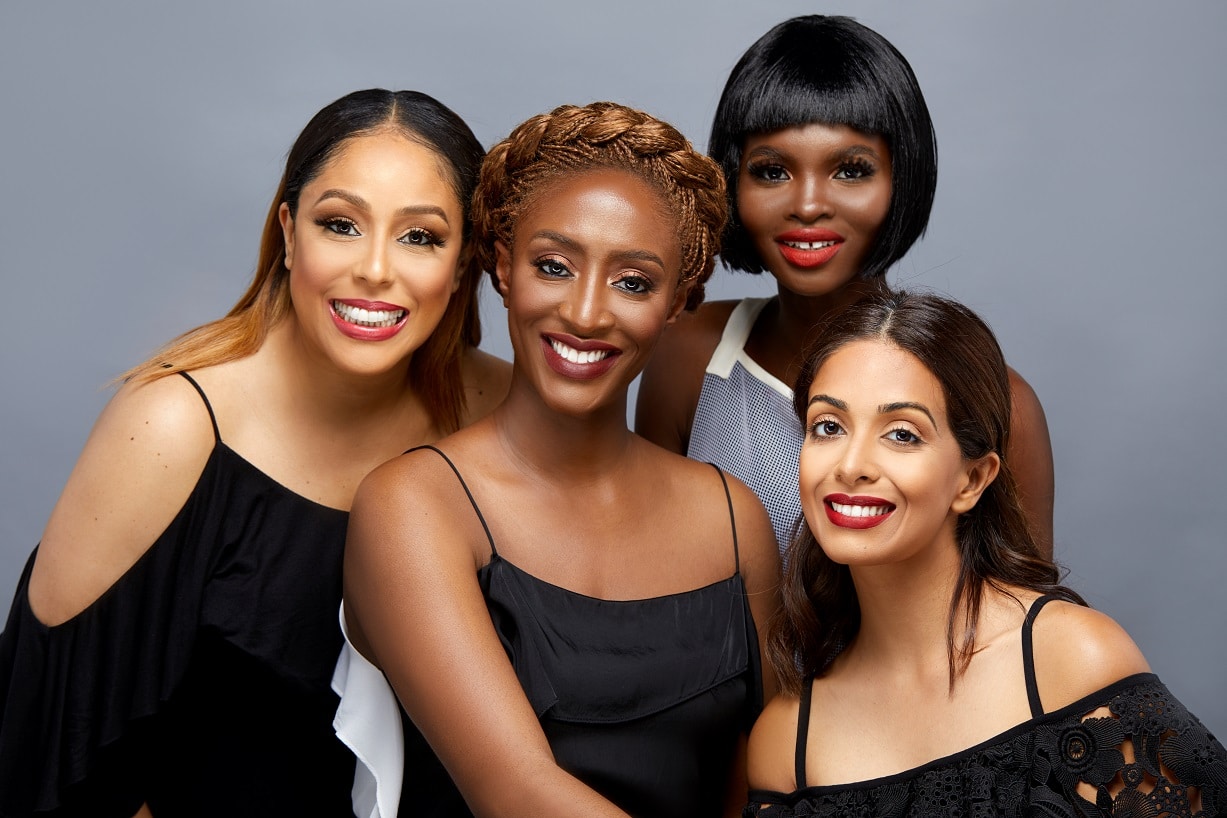 Dozie (center) is hands-on in every aspect of Bossy’s marketing.

She founded Bossy Cosmetics to reimagine what a beauty company can do. In addition to offering cruelty-free lipsticks and glosses, she’s delivering advice, inspiration, and services like coaching—and building a community of confident women.

Grounded in a clear mission, Dozie and her beauty brand have found success despite industry naysayers and a global pandemic, wherein global cosmetic revenue was expected to decline by 55 percent and 41 percent of Black-owned small businesses shuttered. While still small enough to box her own products and haul them to the post office, Dozie and her lipsticks have appeared in Cosmopolitan, W Magazine, NPR’s How I Built This, and Essence, among others, and she nearly tripled her base business in 2020.

Dozie’s early success is an inspiration for aspiring entrepreneurs with lessons on how to build a brand that defies expectations and breaks the rules.

Beauty and the Banker

Dozie leveraged her first career to launch her second—both financially and by approaching her startup with a finance executive’s skillset of research, analysis, and guts.

“It doesn’t get more analytical than investment banking,” Dozie says. “I was trained in an apprenticeship industry, where you go out and network and win business by galvanizing the efforts of the team’s collective research. That was my education, so all of that came to play.”

Long before she had produced a single lipstick, she joined the trade group Cosmetic Executive Women. She dove into market research with surveys and focus groups. And despite a lack of product development and manufacturing experience, she trusted her ability to research, learn, and execute new ideas. 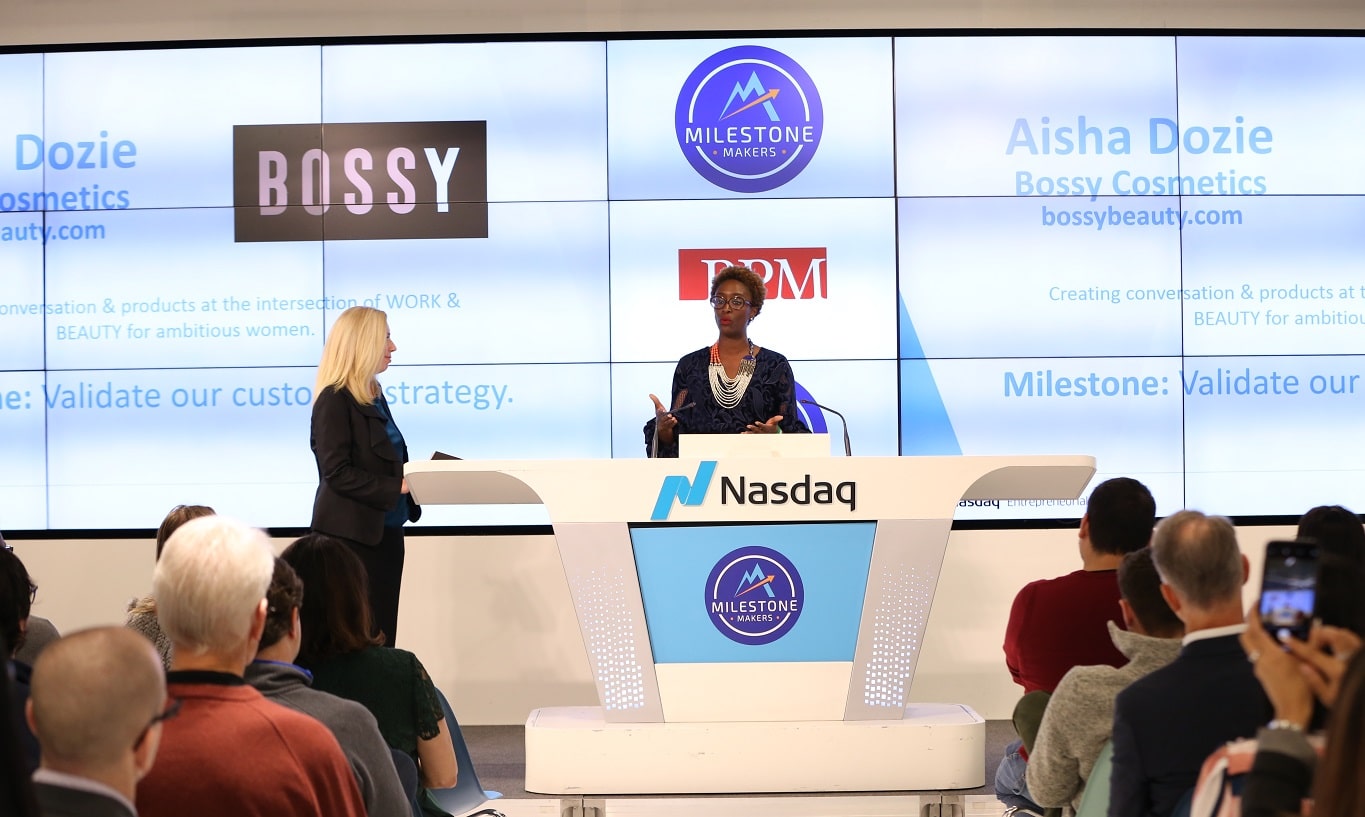 Dozie participated in Milestone Makers, a Nasdaq Entrepreneurial Center program where founders receive business mentoring and training at no cost.

“I kind of started working backward,” Dozie says. “I said, ‘Where are all the smart people who know this industry, let me go meet them, learn from them, talk to them, and figure out how to do this. And, honestly? Then I just did it.”

To Dozie, the Bossy Cosmetics audience is clear: The “Bossy woman” is ambitious. She wants to scale the career ladder and live her life to the fullest. But those industry insiders she was meeting, including prospective investors, insisted that Dozie’s audience also needed to be defined by race. Because she is Black and the face of her brand, they said, she would have trouble attracting non-Black customers.

53.4% vs. 24.7%: The rates Black-owned businesses were denied bank loans versus white-owned in 2014. Black owners were even more likely to apply.

“If you are a Black founder, there is an assumption that you are only making products for other Black people,” Dozie says, “that you are tapping into a white space in the market—no pun intended— and based on your own lived experience, and you fill it. And it’s assumed that lived experience is germane to your race.”

Her target audience, Dozie insists, defies race. A “Bossy woman” may be Black. She may be white or Asian or Latina. Her race, ethnicity, and religion may be important to her—as it is to Dozie—but that’s not what makes her a Bossy woman. Ambition does. That’s why Dozie chose the name. 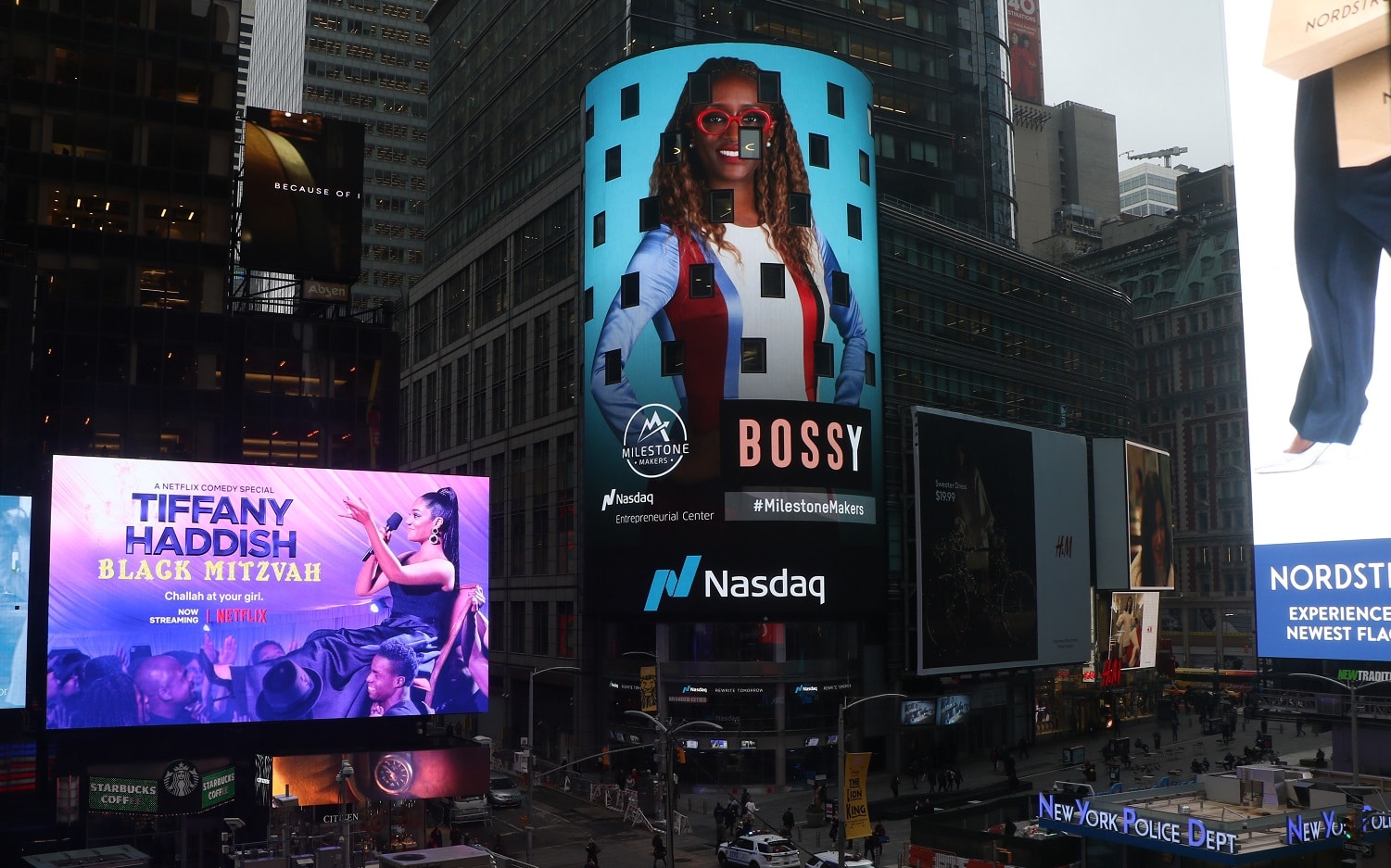 A highlight moment in Times Square as a Nasdaq Entrepreneurial Center Milestone Maker.

“I’ve been called bossy, and I always felt like it was a way of trying to get women to shut up when they are actually articulating a point,” Dozie says. “I wanted to reclaim the word.”

“I’ve been called bossy, and I always felt like it was a way of trying to get women to shut up when they are actually articulating a point. I wanted to reclaim the word.”

Faithful to that aim, Dozie refused to let her Bossy-woman vision be silenced or modified. She has a point of view, and she’s committed to articulating it.

Shifting & Surviving in a Pandemic

Bossy was only a year old when the pandemic cut off Dozie’s supply chain. Her suppliers in China and Italy were totally offline. One by one, her website product pages filled with the same message: “Sold out. Sold out. Sold out.”

She thought the business was dead. Like so many businesses in 2020, she had to act quickly.

“I just emailed people and said, ‘Listen, my supply chain starts in China, goes to Italy, and from Italy, it comes here,'” she says. “‘I don’t know if you’ve noticed, but China and Italy are in a crisis.'”

Customers responded to her honesty. In fact, they seemed relieved to have someone speak to them with such transparency. Dozie realized she had an opportunity to hold her audience’s attention while her products were in limbo. In Bossy’s weekly newsletter and blog, she wrote about the stress of homeschooling three boys while her husband was stuck in Nigeria. She may have been low on sales, but she was suddenly cultivating a thriving community.

She shifted her focus to content and services. She interviewed women in business and academia on Instagram. She partnered with the career coaching and mentoring organization wiseHer to launch Beauty Meets Wisdom, an initiative that offers one hour of career coaching for customers who purchase $50 of Bossy products. The idea originated when Dozie participated in a Nasdaq Entrepreneurial Center program called Milestone Makers in 2019, where she talked to women about what was top of mind for them.

“Many were focused on leveling up in their careers,” she says. “I asked them if they would be open to a beauty brand wanting to support them through coaching. Everyone said ‘yes.’”

“Femininity has power.” Congresswoman Alexandria Ocasio-Cortez echoed Dozie’s content themes of beauty and empowerment in a viral video in 2020.

That proactive networking and research paid off when Dozie was looking for ways to partner with customers that were core to Bossy’s mission but weren’t product-focused.

Dozie realized that her supply chain breakdown created a market research opportunity. As a courtesy, she gave customers a heads up when she was running low on certain colors. Their reaction to those warnings gave her insights into how much they valued particular products over others.

The moment customers learned supplies were low on certain products, they bought three or four lipsticks of the same color.

“There’s a family of colors and textures that people really want to have,” Dozie says. “In the beginning, I was thinking I should have as many colors as possible so everyone can find themselves in the collection. Now I’m learning that—wait a second— just because I’m dark-skinned Black, and you might be Southeast Asian and much fairer, doesn’t mean we can’t wear the same red or a similar red.”

Such a conclusion could have required years of sales data, but Dozie recognized the accidental market research when it fell in her lap, and acted on it. She now knows her collections should have fewer, but more strategic colors. Instead of offering the original selection of 15 lipsticks, she streamlined her collection to six heavy hitters. One color she’s learned will be in nearly every collection? Red.

“Because of the Bossy brand, people really associate us with red,” she says. “I’m learning that a light purple isn’t always the thing for us.”

The Future is Bright, and Bossy

With her selection of lipsticks and glosses now refined, Dozie’s plans for Bossy Cosmetics include doubling down on content and services and eventually expanding into a full range of cosmetics, skincare, and fragrances.

“We want to continue to build our reputation as a delightful and engaging brand on its way to being an iconic brand that’s very different,” she says. “When I was starting, I was told that this idea made no sense. That I, as a Black woman, would find it very challenging to get non-Black women to be inspired by my story. I wouldn’t say it was so much about proving the doubters wrong, but it was about doing the work.”

In other words, the success of Bossy Cosmetics has come down to the same thing that defines both the brand and Dozie herself—ambition. Given the growth and visibility her company has achieved during a year that ravaged so many others, Dozie is proving that “bossy” and “ambitious” are not only permissible ways for a woman-owned business to be, they can be prerequisites for success.

A former screenwriter turned entrepreneur shares how her passion for local food became a business that boomed during the pandemic.