At Desert X 2021, Art Tells Sustainability Stories of the Land and Its People

It’s spring in Coachella Valley. As you drive into Palm Springs on Route 111, the main road into town, a massive alternate take on the Hollywood sign rises up from the base of the surrounding mountains. It reads INDIAN LAND. It’s a towering welcome to Desert X, the art biennial that includes 13 pieces spread out over several cities through the Coachella Valley region.

The jarring sight is a hint at things to come in this third edition of Desert X, which is on view through May 16, 2021. The sign is called Never Forget by Nicholas Galanin, a Tlingit and Unangax̂ artist from Alaska. It draws attention to Indigenous land ownership issues still at play in Palm Springs today, just as many of the other Desert X installations approach sustainability from thought-provoking directions, be it environmental, societal, or economic.

Revealing Truth in the Land

Much of Desert X’s art is baked in the landscape, such as Alicja Kwade’s ParaPivot (sempiternal clouds), an architectural sculpture atop a hill in the small community of Sky Valley. It’s made up of a steel frame with pieces of white marble built onto it that seems to shapeshift when viewed from different angles, reminding visitors that a land’s story can look very different based on who’s telling it, and where they stand. Or Zahrah Alghamdi’s What Lies Behind the Walls, a massive wall made of stacked forms that have been impregnated with cements, soils, and dyes that tie together the landscapes found in the California desert and the southwestern Saudi Arabian desert she grew up in. Viewers mill around this monolith, and in the right light, it looks a bit like they’re worshipping it. 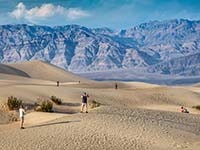 Kim Stringfellow’s The Mojave Project brings to life in art and words a desert landscape enriched by diversity. Explore this Southwestern treasure.

South of Palm Springs, in the town of Palm Desert, sits Kim Stringfellow’s Jackrabbit Homestead. The title for this piece comes from the name given to a small shack that fulfills the requirements of the Small Tract Act of 1938, which allowed the government to sell five acres of desert land to anyone who wanted it for next to nothing. Nowadays, jackrabbit shacks survive strewn all over the land—most of them in one state of disarray or another. Stringfellow’s tiny shack sits by the parking lot of the Palm Desert Chamber of Commerce and raises questions about class, sustainability, capitalism, public land, and the commons. Stringfellow, who authored a book about these homesteads, has created a replica of the one described by Catherine Venn Peterson, who wrote about her homesteading experience for Desert Magazine in 1950.

But not all the works in Desert X respond to the land. One of the works isn’t even viewable to the public—yet. Colombian-born artist Oscar Murillo’s Frequencies consists of him distributing canvases and art supplies to local schoolchildren to be placed on their desks. Over time, they will draw on, spill things on, and interact with the canvases. The canvases are meant to become a diary of the schoolchildren’s lives, and Murillo plans to exhibit these community-based works at some point in the future.

This kind of out-of-the-box thinking is what attracted César García-Alvarez, who curates at Los Angeles non-profit art space The Mistake Room, to co-curate the project with independent art curator Neville Wakefield, who helped found Desert X in 2017.

“When Neville helped start Desert X, it was rooted in a specific history about the landscape, and its relationship to the histories of Land Art,” García-Alvarez says in a phone call with Means & Matters. Land Art was an art-historical movement from the 1960s and 70s that featured mostly white men altering the landscape with grand, permanent gestures (think Robert Smithson’s Spiral Jetty built into the Great Salt Lake). “But when he approached me for being a part of this edition, the first thing that I thought about was not necessarily just the physical landscape, but the people who exist in this landscape.”

The Wishing Well is a pair of enormous, bright yellow, silo-like structures sculpted from linked-together plastic pieces. The yellow gleams in the Palm Springs sun, a reminder that this area is often scorching hot—and dry. The imposing cubes are made from the plastic of hundreds of jerrycans, the plastic container Ghanaians use to collect water from rivers and lakes, leaving them vulnerable to water-borne disease.

Something magical—and sustainable—is happening at San Francisco’s Recology and its unique artist-in-residence program. Read about it.

The water supply concerns in Clottey’s home of Accra, Ghana stem from a lack of infrastructure, but water issues are common in the America West, as well. They usually pit farmers and rural communities against sprawling cities like LA, Phoenix, and San Diego. In Coachella the dynamic is unique: It’s the Coachella Valley Water District and the Desert Water Agency versus the Agua Caliente Band of Cahuilla Indians. The tribe claims aquifer rights and has accused the two agencies of mismanagement of the water supply—namely, overuse of water in resorts, golf courses, and swimming pools, which has lowered groundwater levels to unsustainable levels.

Though the reasons are very different, Clottey’s work reminds viewers that water is scarce in Accra and Palm Springs alike.

“These two separate cities share one common problem. I follow this mantra, ‘A problem shared is a problem solved,'” he says to Means & Matters. “The idea of The Wishing Well is to give people hope—once we recognize we share the same problem, we have to come together to solve it.”

Interwoven Histories of a Land and Its People

Heading north from Palm Springs on the stretch of Highway 111 named the Gene Autry Trail, a series of closely spaced billboards created by artist Xaviera Simmons, has been turning heads and causing traffic jams.

The first billboard proclaims: “YOU ARE ENTERING THE REPARATIONS FRAMEWORK.” 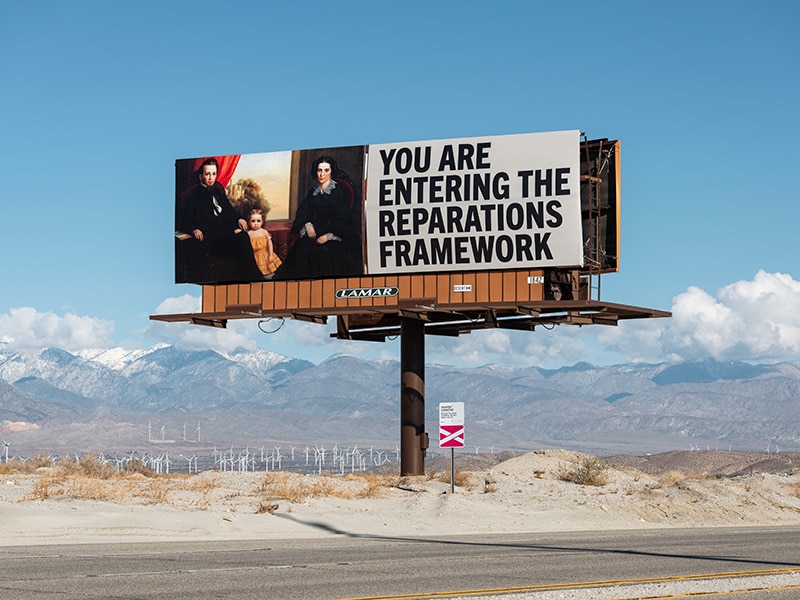 Desert X installation view of Xaviera Simmons, Because You Know Ultimately We Will Band A Militia. 2021.
Photography by Lance Gerber. Courtesy the artist and Desert X.

In another, a Black person straddles a motorcycle—an icon of the desert—and reads: “YOU KEEP OUR MOST BRILLIANT MINDS IN A PERPETUAL LOOP OF ARTICULATING AND TRANSLATING THE RAMIFICATIONS OF YOUR SYSTEMIC GENERATIONAL PLUNDER.”

The piece, called Because You Know Ultimately We Will Band A Militia, speaks to the resistance against unsustainable elements facing citizens in the United States—namely the issue of reparations to Black and Indigenous citizens for years of oppression at the hands of white supremacist systems.

On the other side of one of the billboards, visible to visitors heading toward Palm Springs, is a picture of a woman taking a photograph next to the words, “CALIFORNIA ONCE TRIED TO BAN BLACK PEOPLE.” (It’s true: California’s first governor, Peter Burnett, tried to prohibit free Black citizens from moving to the state.)

“Reparations is part of sustainability,” says Simmons on a call with Means & Matters. “How do you sustain a society? We’re understanding that society is not sustaining right now. It’s actually plummeting in a freefall. And there are ways to sustain society through repairs, through acknowledgment, through making amends, through a robust visual educational platform that helps us to understand how this land became what it was—the theft of it from First Nations people—and then the forced labor of chattel slavery by white people.”

Simmons’ billboards may be uncomfortable for many to read, but they’re as much a call to action as they are a confrontation.

It’s a message that spills out into other works in Desert X. Galanin’s INDIAN LAND sign points out that Palm Springs is Agua Caliente land, and that the United States as a whole is a place stolen—in many cases violently—from the indigenous people of this continent. And that’s what Desert X comes down to: this land, the desert, how it works, how it operates, but most importantly, who lives here.

And spread out over multivarious communities in the desert, a place best known for its resorts and landscapes, it’s about what the viewer takes with them into the experience, and how many of those biases can be shaken.

Kim Stringfellow's The Mojave Project brings to life in art and words a desert landscape enriched by diversity. Explore this Southwestern treasure.

Numbers to Know:The Ocean Your Everyday Guide to Climate Plans, Climate Treaties, Climate Policy, and More Earth Day Every Day: Social Media Campaigns That Are Raising Awareness 3 Youth Climate Activists Who are Redefining Climate Action for All of Us