For Lehua Kamalu, inspiration came from her ancestors. Kevin J. Patel was moved to act by the legacy of environmental racism in his neighborhood of South Central Los Angeles. Vasser Seydel grew up in a family of environmentalists.

Now all three are leaders in a new generation of climate activists. Across the globe, youth climate activists are among the loudest, proudest, and most progressive voices mobilizing against our climate emergency from a range of angles and approaches. Collectively, they are redefining climate activism and action through both their strategies and tactics. 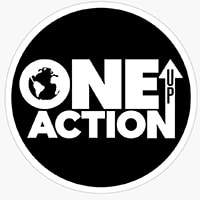 4,000: Number of trees OneUpAction has planted in environmentally neglected neighborhoods.

The trio of young climate activists recently came together for a conversation about how they and others are galvanizing momentum toward creating a sustainable future. Sponsored by Grounded and Bank of the West, the discussion was led by Kira Stoll, chief sustainability and carbon solutions officer at UC Berkeley, which is among the nation’s leading institutions for training future climate leaders.

Kamalu, Patel, and Seydel painted a picture of a generation feeling the effects of climate change like none before—as well as one perhaps more deeply committed than any before. Based on their insights, here are some ways the youth climate movement is redefining activism and action—and four lessons others can learn from these young leaders.

Many of today’s young climate activists reached adulthood during an American presidential administration that from 2017 to 2021 rolled back environmental regulations and engaged in climate change denial.

“What’s grown from that is so much more passion and innovation around how we address the issues,” says Kamalu.

Climate change has never been a theoretical exercise for many younger people. They will be CEOs, business owners, political leaders, and parents in 2050 when the planet is either dying or healing. From wildfires to hurricanes, they are already accustomed to seeing climate change’s effects firsthand. That, coupled with increased politicization around the issue, produces urgency.

“Sometimes you have to listen to the people who are most invested in the future of the Earth. ”

Patel cited the example of youth organizing to help with phone and text drives during January’s Senate runoff elections in Georgia. Urgency drove action, as young activists knew the makeup of Congress would play a critical role in how the climate crisis could be addressed.

“We won those two seats because we really understood that we cannot wait around for climate action,” Patel said. “Young people are taking any chance they have to really be involved in politics so that they can have a voice and a seat at the table.”

Younger people will bear the brunt of climate change in decades to come. And, as Kamalu said, “Sometimes you have to listen to the people who are most invested in the future of the Earth.”

The youth climate movement isn’t only about young people. And it’s not only about any one type of young person. Kamalu, Patel, and Seydel all stressed the importance of creating coalitions that span generations and are intersectional across lines of class and race.

One example of spanning generations comes from Kamalu’s Honolulu-based Polynesian Voyaging Society. The group uses traditional sailing techniques and vessels to foster a sense of connection to the past as well as an alternative way of thinking about resources and the climate.

“A lot of what we are able to do here in open-ocean sailing on traditional voyaging canoes is really helping to remember and redefine some narratives that we hold about our relationship to the ocean to the earth and to the other people we share it with,” Kamalu said.

Intergenerational knowledge and collaboration are key facets of her group’s mission.

“We have so many example and histories of Pacific Island people from all over the ocean who have had models of sustainability, who have carried on values through many generations,” Kamalu said. She explained a lot of her work is less around convincing people to think about climate change or get involved and more about pointing to the past, and providing “just a quick reminder that they already have all the tools they need to figure out what to do from the place they come from.”

For Patel, helping form the first-ever Youth Climate Commission in Los Angeles County underscored the importance of both intergenerational and intersectional collaboration. Like many urban areas, Los Angeles has legacies of environmental injustice that still impact communities today. The commission will include youth from all parts of the county. For Patel and other activists, these legacies highlight climate action as a means toward addressing broader themes of inequality.

“Younger generations and older generations have to work together to implement the solutions, actions, and policies needed to fight the disparities, injustices, and inequalities that are happening to communities all around the world,” Patel said.

Youth climate leaders are among the first generations to grow up with digital tools in their hands since before they could read. Now they’re leveraging that status as digital natives.

Social media has also leveled the playing field for gaining audiences and attention. Greta Thunberg, for example, has 4.9 million followers on Twitter. Granted, the Swedish teenager is the youth climate movement’s most famous face—but just a decade ago, that following and direct audience would have been unimaginable for a teenager from a relatively small country. 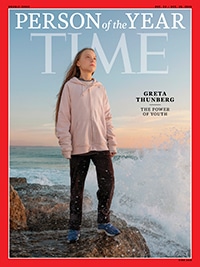 16 years old: Thunberg’s age when she was chosen as Time magazine’s Person of the Year for 2019.

“Something else I’ve seen with the youth climate movement is creativity,” said Seydel. “Whether that’s the different platforms on social media or actually finding creative and artistic ways to communicate the climate emergency that aren’t necessarily always depressing or too overloaded with information.”

“We’ve seen youth in particular being the best fit for adapting to these challenging times. ”

Seydel’s organization The Oxygen Project launched a campaign last year aimed at stopping the practice of deep sea mining. The campaign was able to launch during the pandemic because it relies exclusively on digital tools. The campaign includes educational materials, invites participants to sign a letter to the United Nations, and provides suggested social media copy for lobbying titans of industry online. The Oxygen Project even compiled an album by artists who donated songs celebrating the ocean.

6: Number of musical artists who contributed to The Oxygen Project’s complication, which is titled Deep Blue.

“We’ve seen youth in particular being the best fit for adapting to these challenging times with the tools at our fingertips, and one of those things is digital media,” Seydel said.

No longer do you need an advanced science degree or extensive policy experience to join the climate movement. Youth leaders are acutely aware of the opportunity this presents.

Want to work in sustainability? Learn how with these tips from UC Berkeley experts.

Even if your own effort seems small at first, digital communications and the all-hands-on-deck aspect of the youth climate movement can nurture optimism and empowerment.

“I couldn’t do the work I’m doing in my niche every day if I couldn’t hear that everyone else is doing the work in their niches,” Seydel said. “It gives you a sense of ease and hopefulness that all of us together are going to be able to make larger systems shift.”

You can watch the full conversation between Kamalu, Patel, and Seydel on How the Youth Movement is Redefining Activism and Action, below. 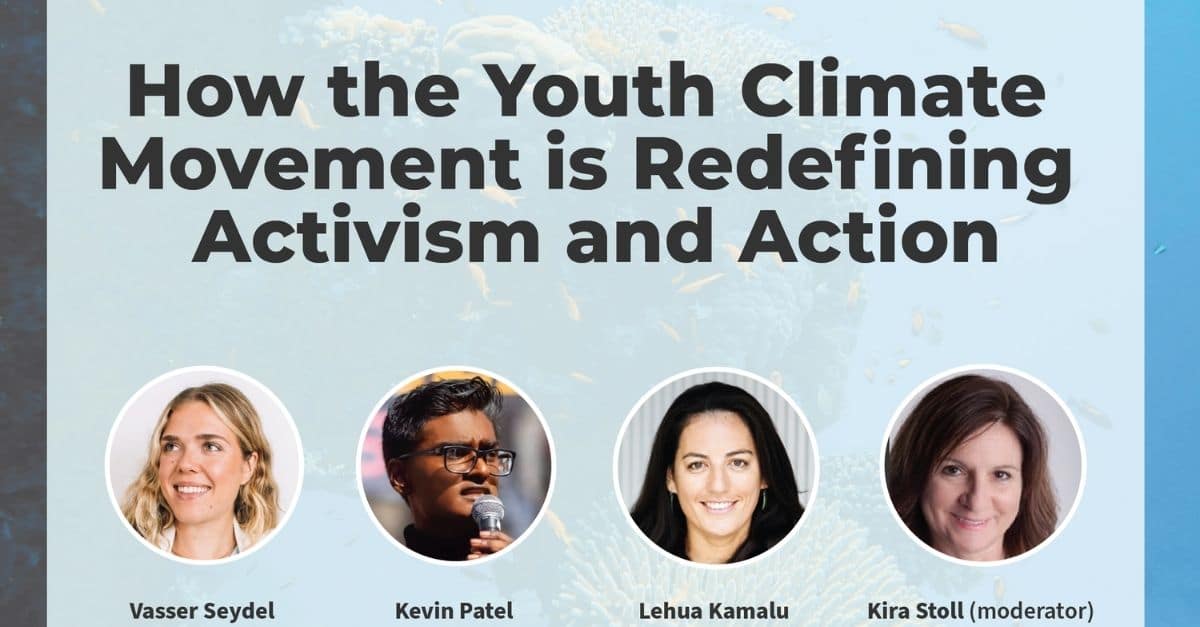 On April 22, 1970, around 20 million Americans took to the streets, many wearing masks, to protest the pollution that was choking …

Numbers to Know:The Ocean Your Everyday Guide to Climate Plans, Climate Treaties, Climate Policy, and More At Desert X 2021, Art Tells Sustainability Stories of the Land and Its People Earth Day Every Day: Social Media Campaigns That Are Raising Awareness