As a third-generation farmer in Washington’s Columbia Basin, Austin Allred cut his teeth on row crops and orchards. But ever since high school, he’s had something else to prove.

Allred, the owner of Royal Dairy, has ambitions for large-scale regenerative agriculture that go far beyond achieving net zero carbon emissions, which has become a notable albeit commonplace corporate goal these days. Allred believes farms have the potential to do a lot more. They can be an essential force for protecting the planet, while still providing a healthy long-term ROI. 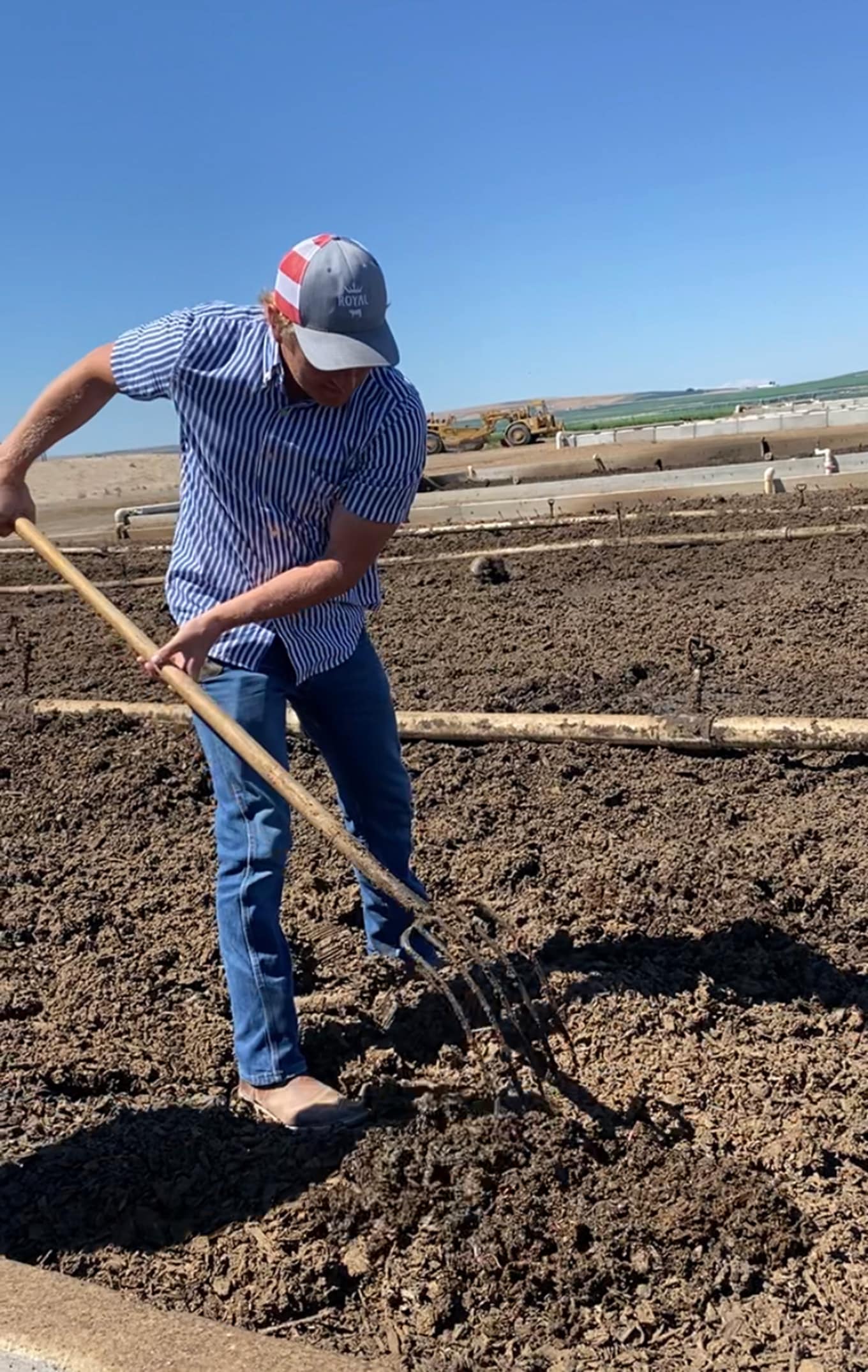 Austin Allred works with the vermicompost on his eight-acre biofilter worm farm.

“There is no reason why every agriculture system should not be carbon negative,” says Allred, who has a herd of nearly 10,000 cows. To be carbon negative means not only to offset one’s emissions but actually to remove more carbon dioxide than is emitted. “Being carbon negative when you are utilizing soils and cattle together is a very realistic goal.”

“There is no reason why every agriculture system should not be carbon negative.”

Royal Dairy, a Bank of the West customer, is about 150 miles southwest of Seattle. It’s a member of the Northwest Dairy Association (NDA) and supplies milk to the NDA processing subsidiary, Darigold. With its carbon-negative goals, Royal Dairy could become a model for a sustainable future in the agriculture industry, which the US government estimates generates 11 percent of all greenhouse gas emissions.

Learn how a California dairy turned methane from cows into clean energy to power the farm and charge 17,000 BMW electric vehicles.

Allred’s father years ago had the foresight to add a dairy to their crop farm and orchards. Carbon sequestration on Allred farms depends heavily on the ability to grow value-added crops for cow feed and use cow byproducts to build soil health. As it turned out, the cows were just the beginning. Restless and relentless, Allred would pull out all the stops to prove large-scale agriculture can be environmentally sound–including waterskiing in a lagoon of treated manure. But more on that later.

This story is about how Royal Dairy has combined several innovations in pursuit of a carbon-negative goal, including smart use of technology, a multi-generational view of farming, capitalizing on carbon credits, and an unlikely ingredient—insatiably hungry worms.

How to Lower Farm Emissions with Worms 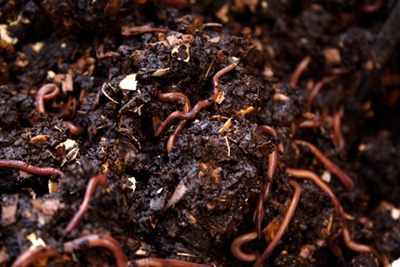 “I was looking for a solution to clean our water and to convert our lagoon into an irrigation pond,” he recalls. Like other dairy farmers trying to reduce emissions, he explored solutions that included reverse osmosis, ultrafiltration, and numerous manure and water recycling systems designed for livestock.

While at the Tulare Farm Show, he found an international company called BioFiltro, which happened to be another Bank of the West client. BioFiltro offered a pioneering wastewater solution powered by worms. Its systems have helped industries from livestock and aquaculture to alcoholic beverages and food processing put vermifiltration to work. 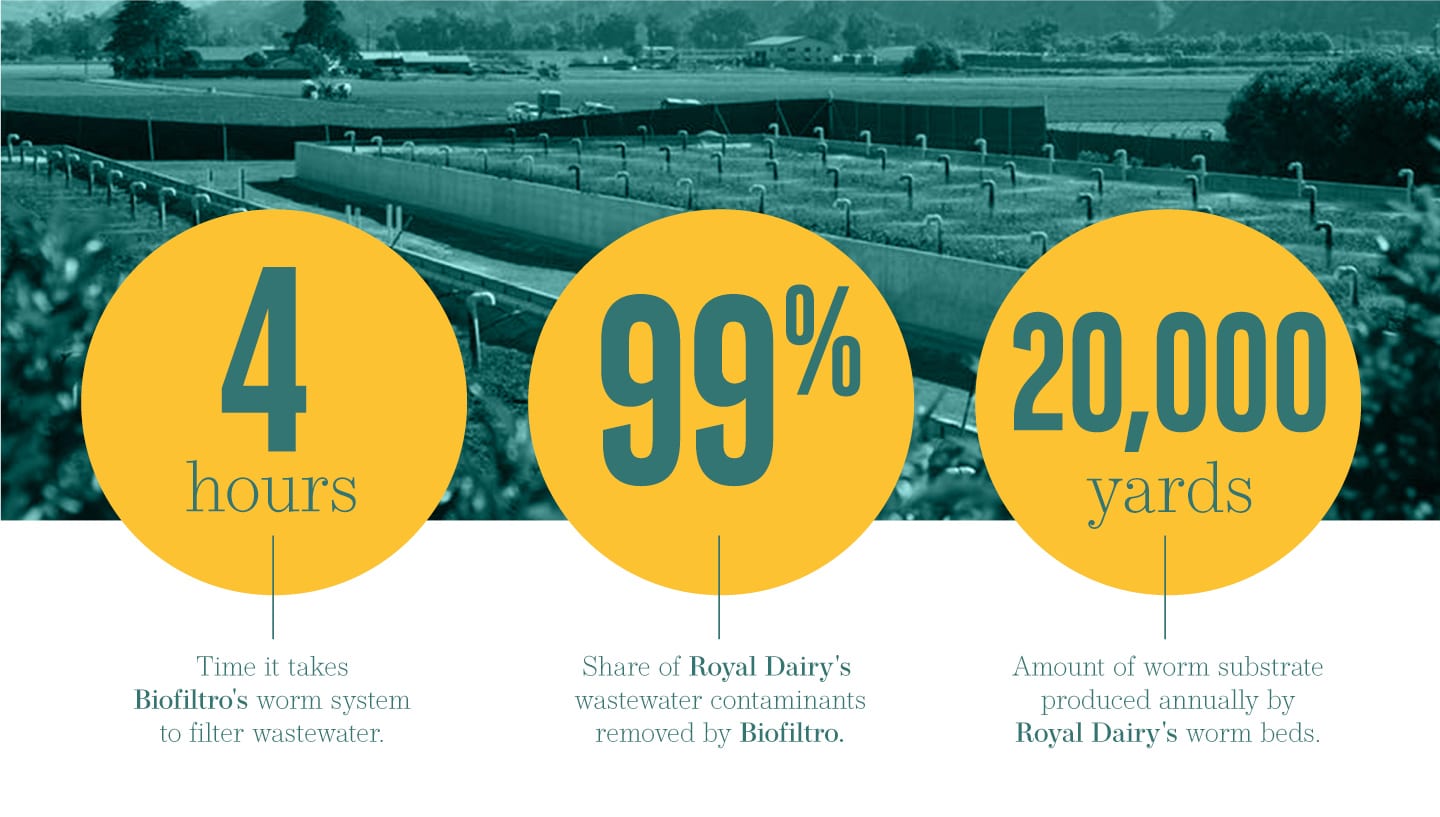 The biological processes behind BioFiltro’s Biodynamic Aerobic (BIDA) system happens in 5-foot-deep concrete beds. Wastewater settles through a worm- and microbe-infused layer of wood chips. Then it passes through crushed rock on its way to a drainage basin. Within four hours, the system removes 99 percent of wastewater contaminants.

Royal Dairy installed its pilot BIDA system in 2016, and expanded it in 2018. The latest expansion, completed a little over a year ago, brought Allred’s worm farm to 7.5 acres—capable of processing 400,000 gallons of wastewater per day. About 75 percent of the recycled water goes to clean cow pens and dairy systems, and the rest is used for irrigation.

Allred and BioFiltro’s CEO celebrated in 2020 by waterskiing in the tea-colored lagoon.

The Business and Environmental Potential of Worms

Along with cleaner water, Allred estimates Royal’s worm beds will generate about 20,000 yards of worm substrate annually, which is a potential source of revenue. The high-value substrate—comprised of worms, worm castings, and composted wood chips—is already nourishing Allred family apple orchards and being sold to some local farms. Allred says a potential even exists to sell substrate to the government for soil remediation. 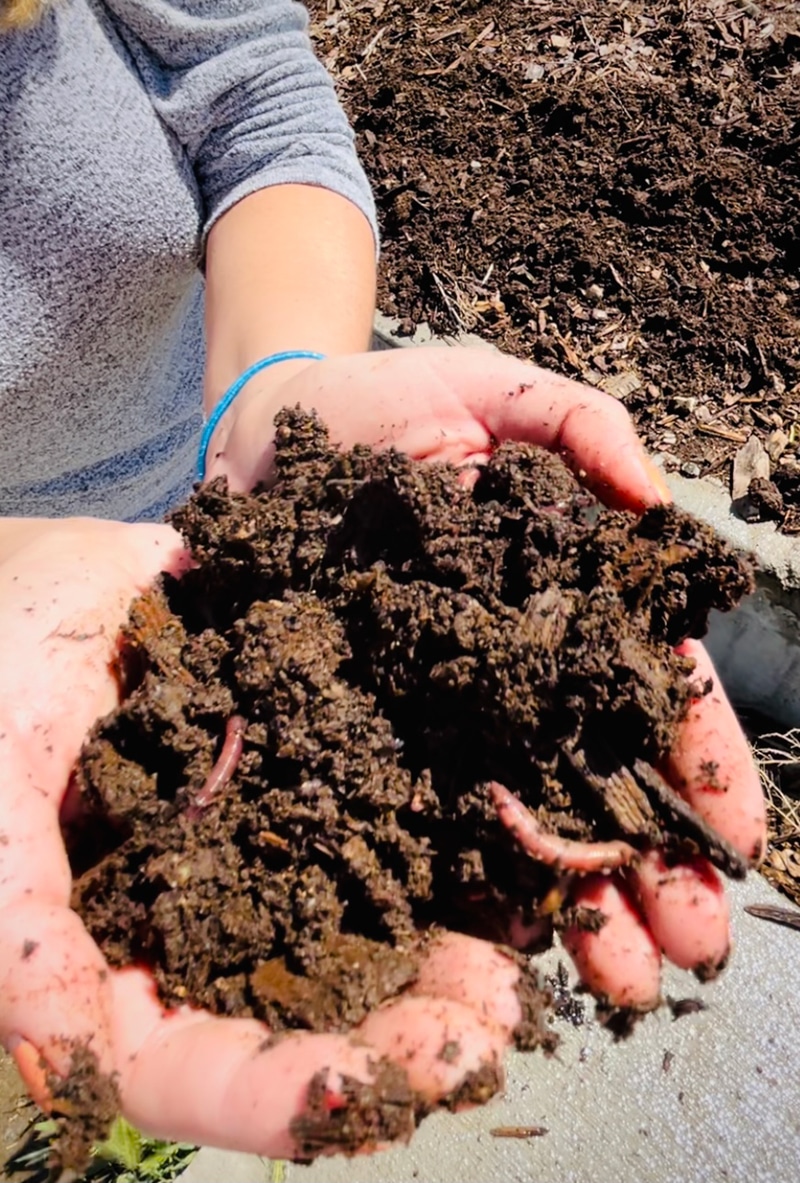 With Royal Dairy registered on Verra’s Verified Carbon Standard, Allred’s been able to sell carbon credits generated by the BioFiltro system. He estimates the latest expansion puts those annual credits at 45,000. Each credit represents a 1-metric-ton reduction in carbon dioxide equivalent emissions (CO2e)—roughly equal to the CO2e produced by driving a car from San Francisco to Atlanta. 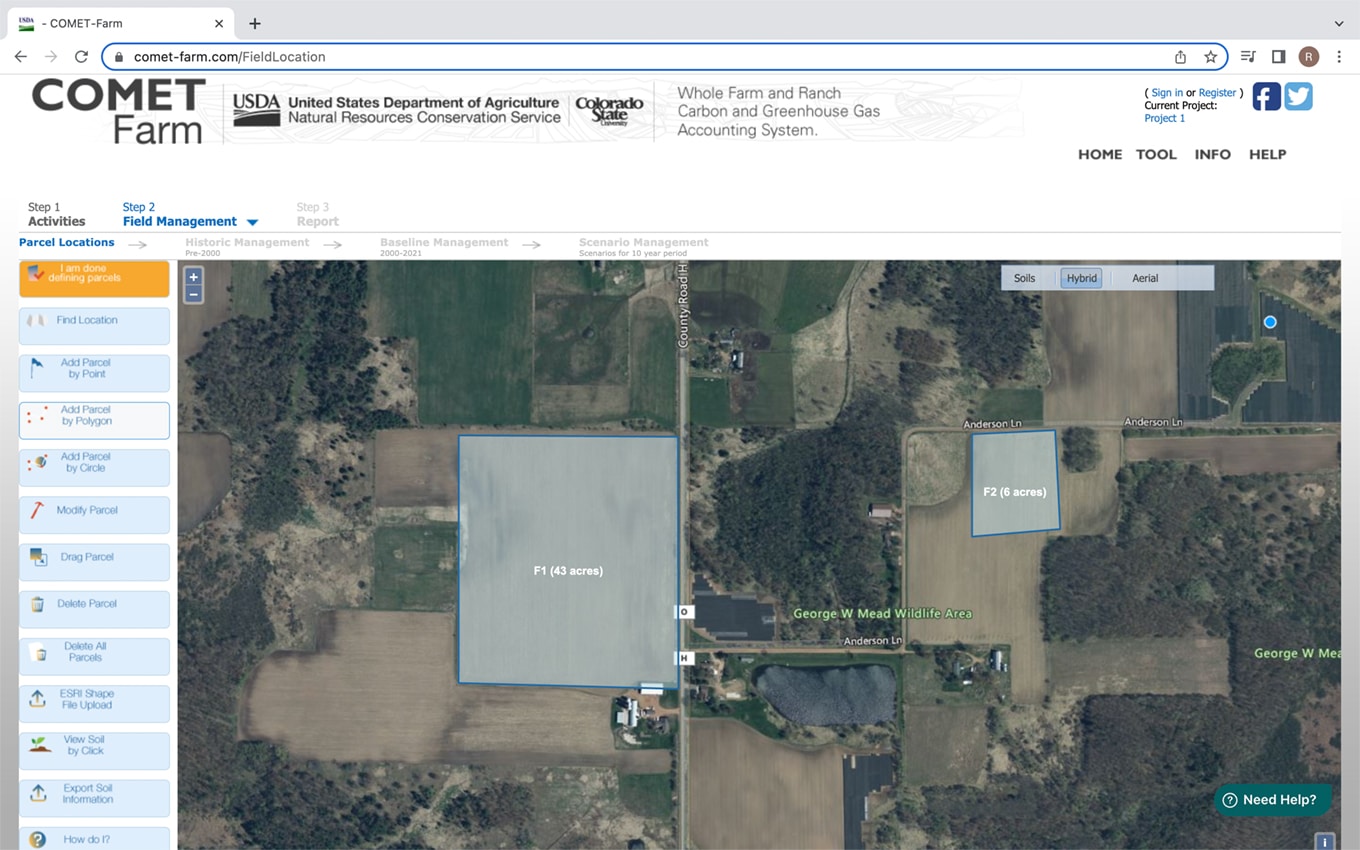 Since Allred started using COMET-Farm, he says operations have improved their per-acre soil carbon sequestration by more than 1 ton of CO2 equivalents annually. In a market where consumers are increasingly interested in sustainable agriculture, those gains have potential marketing value. And Allred cites a more direct impact on his operations as well.

“Carbon in the soil reduces your synthetic fertilizer—that is a huge savings,” he says.

“Carbon in the soil reduces your synthetic fertilizer—that is a huge savings.”

Making a Case for Climate-Friendly Cows

Allred acknowledges people typically don’t associate cattle—especially dairy cows—with sustainability. But he believes that a regenerative, soil-health framework that properly manages synergies among soil, crops, and livestock can change that.

“Without [cattle’s] role in our agriculture system, I would venture to say—and I’ll put my career on it—that our soil health goes to crap really fast,” Allred says.

Allred’s current project is to spread awareness about the importance of cattle by developing a traceability app called FarmTracer. A work in progress, the app is a way to educate consumers about an animal’s role in a sustainable system. The beta version that helps market Royal Ranch beef enables consumers to access animal-specific carbon footprint data tied to individual animal IDs. The app also features Allred cherries. Plans include third-party certification of other equally transparent regenerative farms.

Allred is confident Royal Dairy and associated Allred family operations can and will reach his carbon-negative goals, while also running a healthy business.

The voluntary carbon credits market is estimated to exceed $50 billion by 2030.

“We don’t have to give up our profit in order to create an incredible regenerative system,” Allred says. 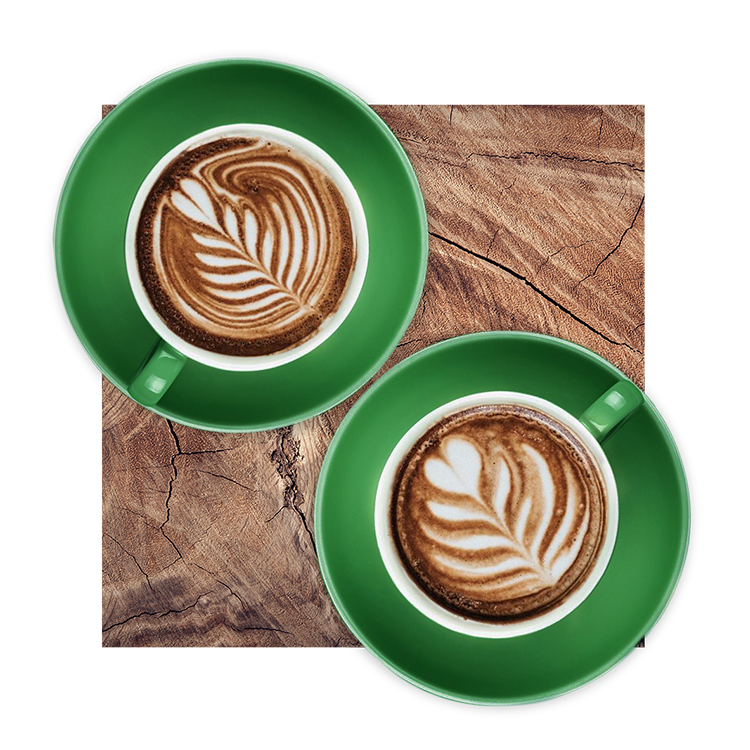 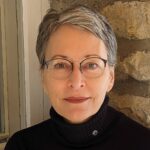 Jolene is an Iowa-based freelance writer who can't resist old stone houses and native blooms. She covers commercial horticulture, agriculture, sustainability, and anything that connects people with plants and food.

A California dairy is turning methane from cows into clean energy for 17,000 BMW electric vehicles. See how Bar 20 Dairy is shaping the future of sustainable farming.