How Regenerative Agriculture Tackles Climate Change from the Ground Up

Jacqueline Smith recalls how growing up in Missouri, she could not stand what farming was doing to animals, people, the land, our planet. But what could a teenager do about it in Joplin, a city best known as a hideout for Bonnie and Clyde?

“What I decided to do as a young person was to boycott the industry, so I became a staunch vegan,” she says. She did not see a future for herself, or anyone else for that matter, in an industry that kept so many people in poverty and in opposition to nature, Smith recalls, as she strolls through a pasture outside Lawrence, Kansas. 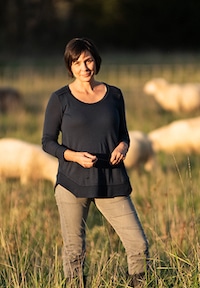 The indictment of industrial farming takes many forms—inhumane working conditions, reliance on harmful chemicals, a disregard for animal welfare, water waste—but in recent years, one charge in particular has gained prominence: Conventional farming is fueling climate change. Farming’s assault on the planet’s atmosphere is a two-pronged attack: CO2 emissions from farm operations—which in the US account for 10 percent of greenhouse gas emissions—and soil degradation, a threat identified 50 years ago. Back when leaded gasoline was still in people’s tanks, and Ronald Reagan was in the White House, Robert Rodale, son of the visionary founder of the Rodale Institute, delivered a speech on, “Why Regenerative Agriculture has a Bright Future.”

The Sustainable Agriculture trends that are changing the business of food.

Fast forward to today’s climate crisis, and Rodale’s forecast for regenerative farming seems prescient. Big brands—General Mills, Annie’s, Dr. Bronner’s, The North Face, Patagonia, and others—have made regenerative agriculture part of their supply chain. There is a regenerative certification program. And the teenager back in Joplin? After a stint in the Peace Corp, Jacqueline Smith chose a life in sustainable farming and today owns Central Grazing Company, a sheep farm using regenerative practices to revitalize the land southwest of Lawrence. 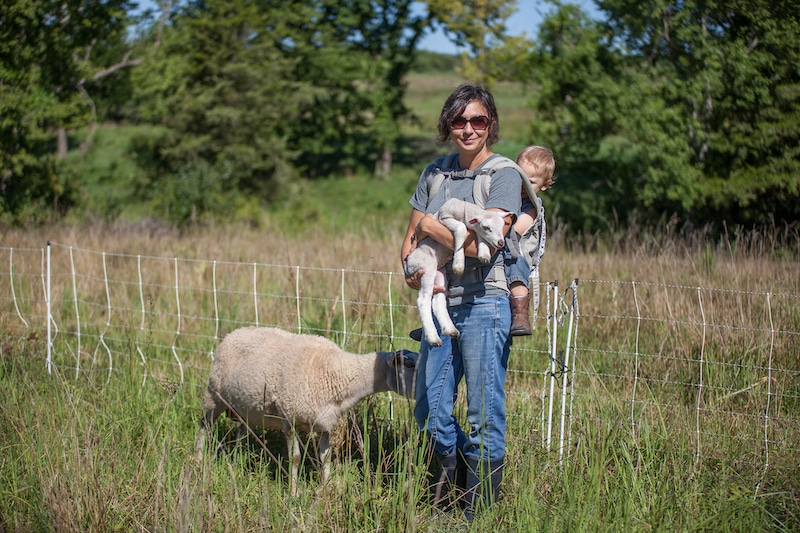 What is Regenerative Agriculture?

“Ninety percent of agriculture across the world is degenerative, meaning it’s degrading the ability for the land to function,” says Finian Makepeace, co-founder of the Los Angeles-based non-profit Kiss the Ground. 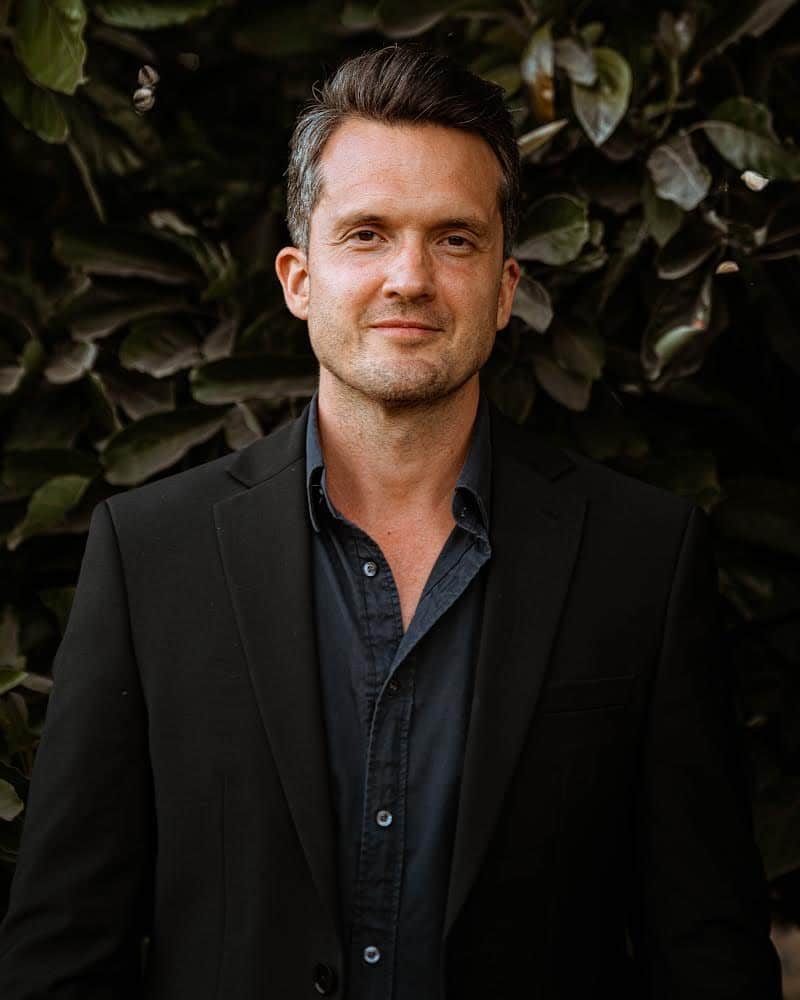 Regenerative agriculture is not new. Indigenous people have been protecting the land for generations using sustainable practices, such as the interplanting of corn, squash, and beans in what is known as the Three Sisters.

Large-scale, industrial farming uses the land like a factory to be exploited as efficiently and productively as possible through the application of pesticides and herbicides, heavy tilling, and other methods that increase yields at the expense of natural soil health. As a result, half the carbon stored naturally in the earth’s soil has been released into the atmosphere, according to Project Drawdown.

“Half the carbon stored naturally in the earth’s soil has been released into the atmosphere. ” 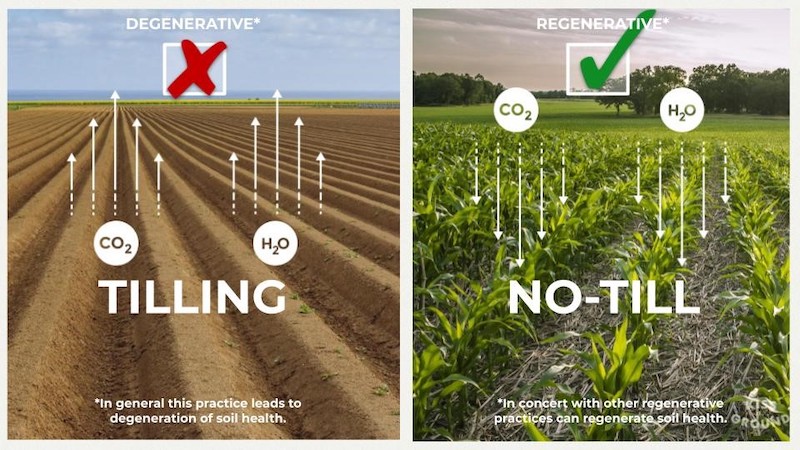 Graphic courtesy of Kiss the Ground

Makepeace explains: “The word regenerative means something is repairing or rebuilding so that it can function again at its highest state. Regenerative agriculture is agriculture that’s causing our ecosystems to regenerate so they’re at their highest functioning state. That means when the rain falls, the landscape is maximizing its ability to absorb and retain water, and when it’s sunny outside, that ecosystem is maximizing how much photosynthesis it can create and how much carbon it can sequester.” 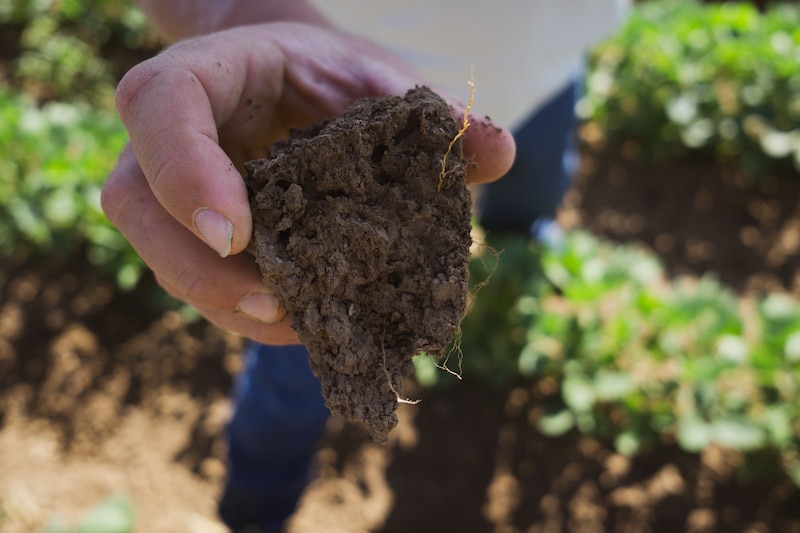 Regenerative Is The New Organic

If organics were Baby Boomers’ farm and food revolution, then regenerative agriculture is emerging as the transformative farm phenomenon for Millennials and Gen Z. For those born into an overheating planet, regenerative farming is an essential piece of the puzzle to reverse climate change. Proponents say that businesses and consumers have to shift to regenerative food and textiles in their purchasing and supply chains if they care about saving the planet. Without healthy soil, we will never capture enough CO2 to stop global warming. And, the clock is ticking to take action. 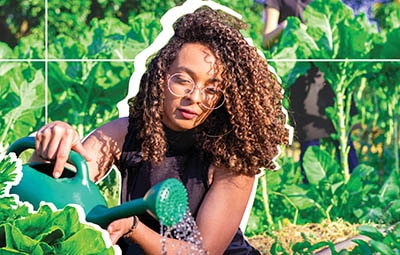 5 Food Activists You Should Know.

“We’re losing an area of farmable land the size of England every year,” Makepeace says.

Awareness among businesses, government officials, and the public is also on the rise. Makepeace’s organization has a wealth of resources, including the award-winning documentary film Kiss the Ground narrated by Woody Harrelson. Streaming on Netflix, the film has been called “climate-skeptic-proof” by Fast Company and has attracted nearly 10 million trailer views.

The day after Kiss the Ground premiered on Netflix, the Los Angeles City Council launched RegenerateLA to promote carbon storage in healthy soil through expanded composting, removing pavement that is not used, promoting urban farming, and educating city staff about regenerative land management. 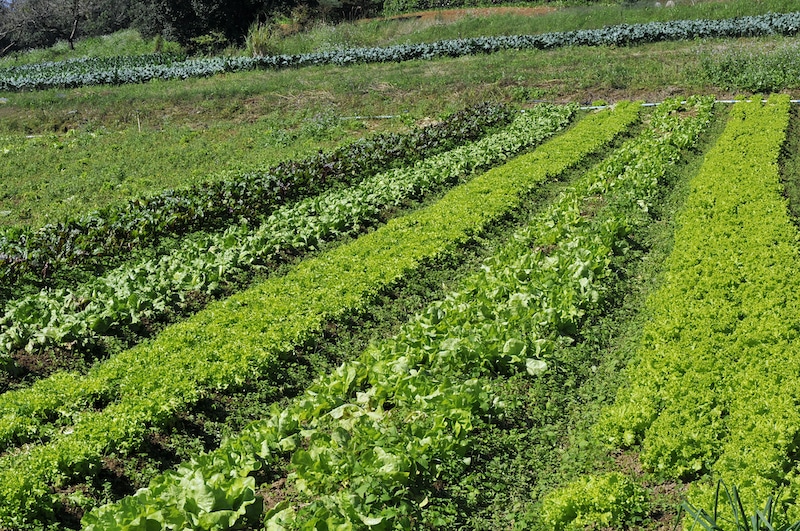 As momentum grows for soil health, one hurdle for regenerative farmers is financing.

“We need to radically rethink and reimagine how we use financing, ecology, and markets to regenerate the world, rather than keep perpetuating a more and more extractive or industrial approach to using resources,” says Phil Taylor, founder of Mad Agriculture, a Boulder, Colo.-based organization providing expertise and financing for farmers using practices that support the environment. 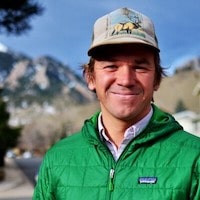 Phil Taylor of Mad Agriculture: “We look at both the financial and the ecological wealth that you will be building over that time period.”

Mad Agriculture began by helping farmers interested in regenerative practices primarily in Colorado, as well as in the upper Midwest states of Minnesota, Wisconsin, Iowa, Illinois, and the Dakotas. Since many regenerative farming techniques require several years to realize a return on the upfront costs, Taylor and others recognized a need for new lending models. 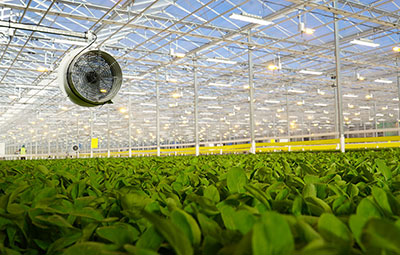 How one tech entrepreneur is rethinking salad.

“We discovered that when we went to activate these kinds of farm visions that really leaned into conservation and regenerative practices, the farms were often hamstrung by the financial products that the bank offered,” Taylor says. “They weren’t flexible enough to allow them to reinvest in the land because the banking sector operates on a one-year time cycle, and ecosystems—especially ones that need restoration and reinvestment back into soil health—require a much longer timeframe.”

So, Taylor and his colleagues raised a $10-million fund to provide flexible financing for working capital for growers to transition to regenerative and organic farming. The Perennial Fund provides three- to eight-year, low-cost loans tailored to individual farms. The Perennial Fund uses a “pay-what-you-can” approach during the transition period, with principal payments deferred until the new model begins to generate revenue. Borrowers can tie loan payments to revenue or choose a regular annual percentage rate.

“We look at both the financial and the ecological wealth that you will be building over that time period,” Taylor explains. “We’ve just been kind of playing around with developing loan products that we feel meet the needs of the land and meet the needs of the farmer while enabling regeneration.” 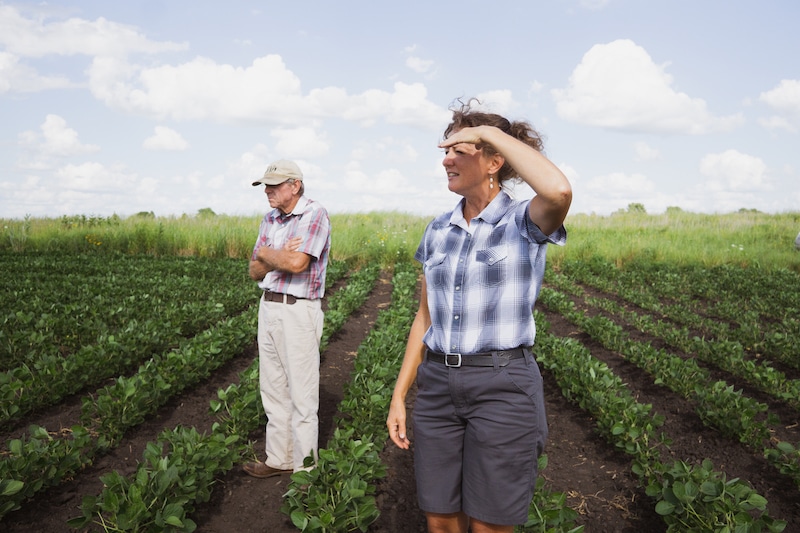 In the field on the Mad Ag 2020 road trip through the Midwest (photograph by Brandon Welch).

How to Join the Regenerative Movement

As more farmers explore regenerative agriculture, here are a few things forward-thinking businesses are doing to get ahead of growing consumer interest in regenerative farming and products that support healthy soil. 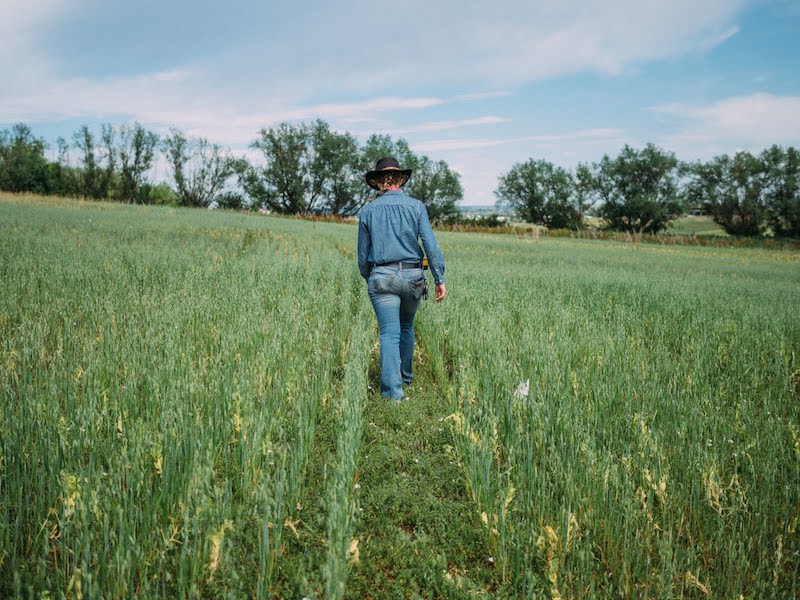 A Movement for the Future

Meanwhile, Smith’s Central Grazing continues to grow its market for regenerative and Animal Welfare Approved lamb and leather bags. Her farm also works with a network of Midwest farmers in remote communities across Kansas, Oklahoma, Missouri, and Iowa. Without easy access to consumers or end markets, they are locked into commodities that require conventional production processes, including tilling and chemical usage. Working with Smith gives them an avenue to shift toward regenerative practices.

“This isn’t something that you just jump into for a few years and then you jump out. It’s a long game; this is my life’s work,” Smith says. “There are statistics that say we’ve got 57 years of topsoil left, and I guarantee that I will be working on this until I can’t anymore. I hope we can make enough of a dent that the person who comes behind me can carry that torch and extend that statistic beyond 57 years.” 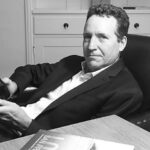 Jim lives on the Russian River, where California wildfires, windstorms and floods have forced him to evacuate his home 4 times in the past 2 years. A fiction writer, he received the 2017 PEN/Robert J. Dau Short Story Prize.